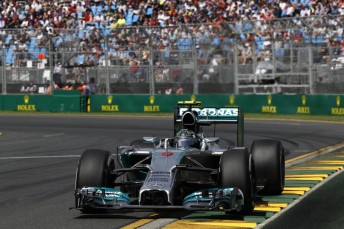 The Mercedes racer made the most of a stunning start and enjoyed a trouble free drive to the chequered flag, ahead of Ricciardo, who recorded the first podium for an Australian in his home event.

Rosberg’s victory in the 30th running of the event arrived after his father Keke Rosberg took victory in the first F1 Australian Grand Prix at Adelaide in 1985.

The race was not without drama as only 14 cars finished. Reigning world champion Sebastian Vettel and polesitter Lewis Hamilton retired early on with power unit issues.

After a delayed start caused by the stricken Marussia of Max Chilton, Rosberg made an impressive start to grab the lead at the first turn, while Ricciardo slotted into second with Hamilton third.

There was plenty of drama behind as Caterham’s Kamui Kobayashi locked his wheels and subsequently slammed into the side of Felipe Massa, firing the Williams into the gravel and retirement.

Hamilton soon lost his third spot to rookie Magnussen but the Brit’s race soon came to halt when a engine issue forced him into retirement on lap 3.

Vettel was the next driver to return to the garage as his Red Bull suffered from a lack of power, resulting in a rare DNF for the four-time champion.

Williams’ Valtteri Bottas brought out the Safety Car just nine laps later as the Finn clouted the wall, ripping the tyre from his right rear.

Button reacted first to the Safety Car with a smart pit stop which elevated him up to sixth just behind Nico Hulkenberg and Ferrari’s Fernando Alonso.

Meanwhile, Bottas, armed with fresh rubber, soon shot back into the top 10, as Rosberg quickly built up another commanding lead from Ricciardo and Magnussen.

The pit stops failed to shake up the order at the front as Rosberg stormed to the chequered flag with a margin of 26.7 seconds.

Ricciardo’s pit stop strategy ensured he came out in front of the impressive Magnussen. The Dane closed in hard on the Australian in the final stages, but the Red Bull man managed to hold him off to record his first F1 podium finish.

Button came home in fourth after a strong final stint ahead of Alonso and the recovering Bottas.

Force India’s Hulkenberg slipped back to seventh while Kimi Raikkonen struggled with his Ferrari throughout and finished eighth.

Both Toro Rosso’s scored points with Jean- Eric Vergne in ninth, while debutant Danill Kvyat scored points on a good day for rookies in tenth.

Sergio Perez, Adrian Sutil, Esteban Gutierrez and Max Chilton were the only other drivers to reach the chequered flag.

See below for Australian GP results