Ricciardo threat ‘no surprise’ to Hamilton 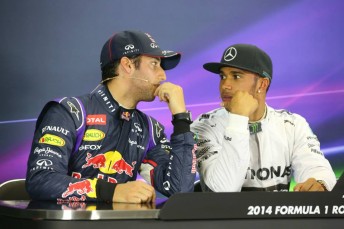 The 24-year-old Australian stole the show on Saturday at Albert Park, briefly appearing destined to score a shock pole position in wet conditions before being edged by Hamilton.

Although Mercedes will still enter this afternoon’s race as heavy favourites, Hamilton believes that Ricciardo’s past performances at Toro Rosso were enough to indicate that the Australian has what it takes to be at the front.

“Not at all,” he said when asked if he was surprised to be sharing the front-row with Ricciardo.

“He’s showed some great performances in previous years and he’s got a good head on his shoulders.

Qualifying had previously been a clear strength for Ricciardo during his two full-seasons with Toro Rosso.

He out-qualified his team-mate at the Red Bull junior outfit, Jean-Eric Vergne, 30 times out of a possible 39.

The Australian will start today’s race 10 places ahead of his four-time world champion team-mate Sebastian Vettel.

The German, who was only out-qualified by former team-mate Mark Webber twice in the whole of last year, is simply aiming to finish the race after being hampered by engine problems on Saturday.

Like his fellow front-runners, Ricciardo is cautious about making predictions for the race, having yet to run a full grand prix distance in his 2014 machine.

All eyes will be on the Red Bull driver at the start, with Ricciardo hopeful he will not repeat the painful sight of Webber’s sluggish getaway from the front-row in 2010 and 2013.

“(It was) a bit up and down last year, but I think they were on the up so let’s see how we go tomorrow,” said Ricciardo of his starts.

“I think it’s going to be interesting for everyone now, with the V6 turbos.

“I think it’s also a bit of a different animal off the line. Hopefully we get off well.”

Changeable weather could again hit Albert Park for the race, with afternoon showers being forecast.

CLICK HERE for more with Ricciardo following qualifying, including his thoughts on driving the 2014 F1 cars in the wet

Next Story LIVE UPDATES: F1 and V8s at Albert Park