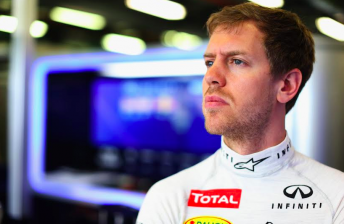 The four-time champion will start from a lowly 12th on the grid as a software issue with his RB10’s Renault power unit contributed to the German failing to progress into Q3 for the first time in 37 races.

This is latest issue to beset the Red Bull squad that has struggled for reliability in pre-season testing.

However, performances at Albert Park this weekend have thus far exceeded expectations with the RB10 much more reliable and closer to the class leading Mercedes team than first feared.

With team-mate Daniel Ricciardo starting Sunday’s from the front row, the car clearly has pace but Vettel’s Q2 engine issue has further highlighted the question marks surrounding the RB10’s reliability.

As a result, the reigning world champion says his only goal is to reach the chequered flag.

“(The) priority is to try and finish the race,” Vettel told assembled media in Red Bull’s hospitality.

“I think we have improved our reliability but we are still a long way to go. We know that generally we are not where we want to be.

“We tried the run the best setup we have for both cars but for some reason the car wasn’t too happy on my side.

“We need to understand that but fortunately it worked for Daniel so at least we have one car where it belongs.”

Despite the software problem, the 26-year-old admitted he is relived his RB10 is starting to show signs of true front-running pace that haven’t been visible in testing.

“My main relief is that the car is performing and it is up to us to put things together,” added Vettel.

“We thought we were (going to be) much further away from the front-runners than we have showed in the dry running this weekend.

“We know there is still a lot to do. There was no doubt we would get there again so it is down to us.”

Next Story Ricciardo threat 'no surprise' to Hamilton