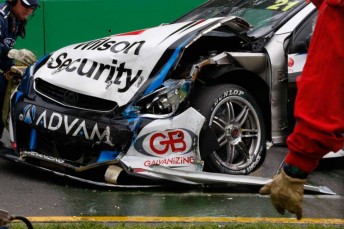 Chaz Mostert has been deemed at fault for triggering the Saturday incident that ruled himself and Dale Wood out of today’s Race 4 at Albert Park.

Mostert has been docked 25 meeting points after admitting to stewards that he had failed to leave room for Garth Tander on the exit of Turn 6.

Tander subsequently collected the left-rear of the Ford Performance Racing Falcon, spinning  Mostert in the middle of the pack.

Wood was an innocent victim in the aftermath, collecting the Ford at an estimated 90km/h.

Mostert is expected to return to his Adelaide chassis for the next championship event at Symmons Plains while Brad Jones Racing repairs to fix its #21 Holden.