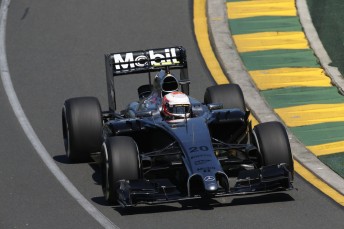 Jan Magnussen aims not to miss another grand prix after his son, Kevin Magnussen’s stunning Formula 1 debut in the Rolex Australian Grand Prix.

Magnussen senior missed the landmark event owing to his commitments in the Sebring 12 Hour sports car race with Kevin leaping into third position for McLaren, the team his dad raced for in the 1990’s.

Speaking exclusively to Speedcafe.com, Magnussen explained how his son has become one of the hottest properties in grand prix racing after the 21-year-old earned his place in the top open wheel class after claiming the Renault 3.5 Series last season.

“It tried not to have any expectations for today. I had a dream that this would happen … a podium would be out of this world,” Magnussen, who raced for McLaren and Stewart, told Speedcafe.com

“This was way more than anyone could have hoped for.

“When we first started driving karts with Kevin this was just some crazy dream. One day maybe he’d be in F1. To see him today on the podium was just unbelievable.

“I can’t even put it into words how I’m feeling. It’s fantastic and he just keeps surprising me.”

“For the last couple of years he has been extremely fast. “The biggest change is how he is using his head and how he is making things happen.

“It was not good. I don’t want to do that too often. But it was good to share it here with friends and family.”

“But I’m going to Malaysia that is for sure. I just don’t want to miss Kevin’s race again.”

While Jan was overjoyed at the result, Kevin was in a state of disbelief in regard to the enormity of what he achieved in his maiden F1 race.

The 21-year-old rookie paid tribute to the McLaren team for their patience in helping him settle into the fold of one of the sport’s giants.

“Its not a win but it definitely feels like one.

“The team is coming off a difficult season and they really wanted to come back. They worked soo hard over the winter and they were working with a rookie as well who hasn’t got any experience.

“Its been tough for them for sure. They have made me feel really at home and comfortable with everything. I couldn’t have asked for more.”