Warren Luff has taken the third and final race of the Carrera Cup at Albert Park to win his second-straight round in the series.

After finishing behind Steven Richards (Laser Plumbing & Electrical) in the opening race of the weekend, the No Second Chance/Phase 8 driver took race #2 and completed his weekend with another strong display to beat home Richards and Nick Foster (Bob Jane T-Marts) in the final.

In today’s event, Luff won the start from Richards, with five-time champion Craig Baird (Bonaire/Wilson Security) moving into the third ahead of Foster. On a busy opening lap, Baird slipped back to sixth while Michael Patrizi (Onsite Rentals Racing), who was coming from the rear of the field, ran off across the kerb and over a tyre bundle. Then Dean Koutsoumidis (Equity-One) spun in the middle of the pack, with the McGrath Estate Agents 911 of Shane Smollen going around as he avoided his fellow Elite Class competitor.

With Luff controlling things at the front, Baird had a great fight with Formula Ford graduate Sam Power (AVCS Consulting). The defending champion taking fourth on the fifth of 10 laps. 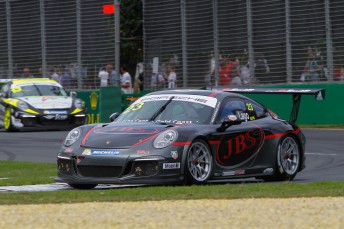 No such issues for Luff who grabbed his second big trophy of the season and his fifth win from the six races so far contested this year, to pull a small but handy margin in the series from Richards and Foster.

Roger Lago (JBS Swift) had a great battle with Stephen Grove (Grove Group) throughout the race for the Elite class. Lago winning his second race of the weekend from Grove. Round one winner in Adelaide, Tony Bates (AFS/All Star Equipment Sales), was in line to finish third, but spun on the final lap allowing James Bergmuller (Porsche Centre Brighton) into the position. Lago the winner for the weekend from Bergmuller and Grove