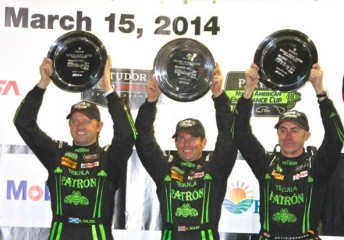 Australia’s David Brabham has finished second at the gruelling Twelve Hours of Sebring in the USA.

The race was won by the Ford EcoBoost Riley of Scott Pruett, Memo Rojas and Marino Franchitti.

Sharing the Extreme Speed Motorsports (ESM) Honda Performance Development ARX-03b (HPD) with Scott Sharp and Ryan Dalziel were in the mix throughout the race.

At the six hour mark of the event, Dalziel was leading the race. He led for the majority of the stint and turned the car over to Sharp for his second stint of the race.

Sharp battled the traffic following his driver change pit stop sequence and was shuffled back in the standings. As the afternoon turned to evening, Sharp turned the car over to Brabham.

Brabham charged to the front of the field to lead the race during his stint. As the cooler evening hours progressed, the No. 1 machine was improving with each lap turned. With less than two hours to go, the final driver change was made and Dalziel would complete the race.

Dalziel reclaimed the race lead at 8:49 p.m. and led for 30 minutes before the caution flag was shown for a prototype car that was off track. While under caution, Dalziel pitted and relinquished the race lead to Marino Franchitti in a Daytona Prototype. The caution lasted slightly longer than 30 minutes.

Once the race was back to green and with 18 minutes remaining on the race clock, Dalziel was running second. Despite running faster lap times than Franchitti, traffic prevented Dalziel from catching the first place car before the chequered flag.

“We can’t be too disappointed with a second and fifth place at Sebring,” said Brabham.

“This was a really strong effort. We’re obviously a little bit disappointed because we really felt we had a chance to win. We all wanted to win this one, but that Ganassi car was just too quick at the end. There wasn’t much we could do. We gave it everything that we had. It was a great race.

“As the cooler conditions came, the car seemed to respond quite nicely to it; it was fast and that’s why we could race so hard at the end. We got caught out with the yellow right at the end, which allowed the Ganassi car to get in front. Whoever was going to lead the last stretch to the flag was probably going to win it. We were in a really good spot to win because we were running up front the last hour or two. Then that yellow came out and put behind and there was nothing we could do.”