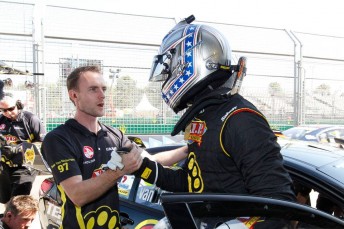 Van Gisbergen made it three wins from three starts

The Tekno Autosports Holden controlled two double-file rolling starts, the second of which followed an early Safety Car, before holding off Fabian Coulthard to the chequered flag.

Coulthard had moved to second when Craig Lowndes ran wide at Turn 9 on the restart lap.

The Red Bull entry recovered to take the flag directly behind Coulthard in third.

The result marked solid progress for Ford Performance Racing duo Winterbottom and Reynolds, who had started 14th and 18th respectively.

The Safety Car was called partway through the opening lap after the leading FPR entry of Chaz Mostert was spun by Garth Tander at Turn 7.

Both cars are now in doubt for Sunday’s Race 4 after sustaining heavy damage.

Jason Bright was another with a hard luck story. Starting eighth, the Team BOC Holden ran fifth before retiring with a stuck throttle on the fifth lap.

Like Bright, Will Davison had also gained places during the chaotic start, moving from 10th on the grid to seventh.

The Erebus Mercedes driver’s race was then ruined by a puncture, which forced him to pit as the Safety Car withdrew.

Scott Pye’s misfortune also continued, with the Dick Johnson Racing Ford a retirement after being squeezed into the Turn 5 exit wall on the restart lap.

The Race 4 grid will be set by accumulated points from the opening three heats, leaving Van Gisbergen to start from pole ahead of Coulthard, Lowndes, McLaughlin and Caruso.

Next Story Mostert and Wood entries withdrawn after crash