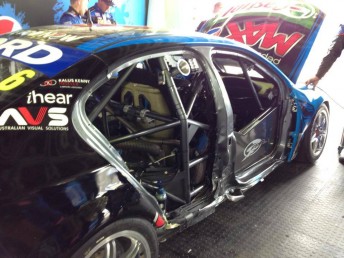 A 23 car field will face the starter for Sunday’s V8 Supercars finale at Albert Park after Chaz Mostert’s Ford and Dale Wood’s Holden both suffered extensive damage in Race 3.

Mostert was turned around by Garth Tander on the opening lap, with the stationary Pepsi Max Ford subsequently collected by the hapless Wood at an estimated 90km/h.

Mostert had been driving FPR’s spare Falcon following a crash at the Clipsal 500 two weeks ago, and will return to his regular mount for the upcoming Symmons Plains meeting as scheduled.

BJR meanwhile has been left with another big workload ahead of the Tasmanian event.

Its partially-completed spare was rushed into action for Jason Bright at Albert Park after the previous Team BOC entry was destroyed in the same accident that claimed Mostert in Adelaide.

Mostert told Speedcafe.com that the Albert Park crash could have been avoided if he hadn’t been squeezed at the apex of Turn 6 by Tander.

The incident will be the subject of a post-race stewards investigation.

“I had a run on him into Turn 6 so had a crack down the inside and he squeezed me for the entry real bad,” Mostert recounted.

“I couldn’t leave him much room on the exit so he was pretty wide on the astro turf and the next thing I knew I was hit and turned into a spin. “After that I was just a sitting duck and poor Dale had nowhere to go.

“It was a pretty big hit and if Garth had given a bit more room we wouldn’t have two wrecked cars.”

Wood was also left to lament the ultimately unavoidable collision.

“It was a big hit and there’s a fair bit of damage to the front,” he told Speedcafe.com.

“It’s certainly not what we wanted out of the weekend and it’s going to be a lot of work for the boys to get the car ready for Symmons Plains.”

Wood had finished 22nd and 21st in the opening two races, while Mostert had been leading FPR’s charge with a pair of ninth place results.

“Our car had pretty good race pace but we’re struggling in qualifying at the moment,” added Mostert, who had been 12th in Thursday’s qualifying session.

“We don’t quite have what some of the other manufacturers have got at the moment in terms of one-lap speed, but we are more competitive in the races.”

Mostert’s demise saw his Pepsi Max FPR team-mate Mark Winterbottom left to take over the mantle of leading Ford running, moving from 14th on the grid to finish eighth in Race 3.

The 2013 Bathurst winner will start 10th in the finale under the accumulated points grid system.