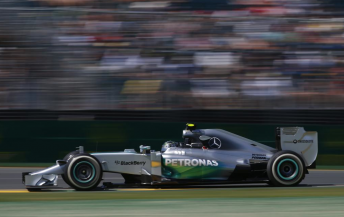 Mercedes confirmed its impressive pace as Nico Rosberg obliterated the field to top the times in the final free practice session at Albert Park.

The German clocked the fastest lap of the weekend so far as he posted a 1:29.375s to finish the hour session nearly 1.4 seconds faster than his nearest rival Jenson Button in the McLaren.

Daniel Ricciardo was the top Red Bull in fifth.

Three drivers failed to set a time in the session with the Williams of Valtteri Bottas forced out with gearbox troubles.

Overcast conditions with the possibility of rain greeted the drivers for the final session but the clouds held off ensuring slicks were the order of the day.

Mercedes began the session strongly as Rosberg was the first to light up the timing screens before Hamilton eclipsed his effort to move to the top.

Gutierrez was the first driver to encounter a mechanical drama when the gearbox on his Sauber malfunctioned on the installation lap.

He failed to reappear for the rest of the session.

Red Bull’s Ricciardo also enjoyed a strong start posting the fifth fastest time in a run of consistent laps for the the West Australian.

His four-times world champion team-mate Sebastian Vettel appeared to struggle complaining of acceleration and balance issues with his RB10, which left him in 12th position overall.

However, the Venezuelan was forced to stop his E22 on track shortly before the end of the hit out.

It was worse for his team mate Grosjean who could only complete four separate installations laps.

While Lotus continued to suffer, there was good news for another Renault powered team Caterham as both their drivers Kamui Kobayashi and Marcus Ericsson finally managed to post times.

The front runners elected to change to soft tyres as the session moved into its final quarter.

Rosberg made the best of the rubber changed as he stormed to the top of the times to finish in great shape ahead of qualifying.

Button and Alonso tried to respond on similar tyres but they were unable to match Rosberg’s effort.

Williams were unable to show the pace previously shown with Massa as he finished in 10th position but he did manage to complete 20 timed laps.

Gearbox issues ended team-mate Bottas’ session early and it is understood a transmission change will be made incurring a penalty.