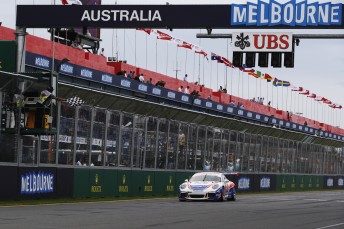 Luff takes the win in race #2 at Albert Park

Warren Luff has taken the second race of the weekend in the Porsche Carrera Cup Australia at Albert Park as his hot start to the season continues.

The result is the No Second Chance/Phase 8 driver’s fourth win from the five races contested, as rival, and race #1 winner, Steven Richards brought his Laser Plumbing & Electrical 911 home in second with Nick Foster (Bob Jane T-Marts) keeping his consistent start to the year going in third.

The eight lap race was alive from the start when Luff out-dragged Richards to the opening turn. Michael Patrizi (Onsite Rentals Racing) made a great start and had a run down the inside of Richards, but locked a brake and slid across into the path of the Davbridge Constructions Porsche of Shae Davies. Both cars were eliminated. Patrizi was hit with a 10-point championship penalty by officials post-race.

The race settled down at the front with Luff easily controlling things throughout the eight lap journey to ease away to win by 1.4-seconds from Richards.

Despite being first across the line in the opening race in the Elite division. Shane Smollen copped a 5-second jump-start penalty, then had to drop back six spots on the grid for another infraction ahead of today’s race. He then finished in the gravel trap on the final lap as Roger Lago (JBS Swift) took the Elite victory ahead of Stephen Grove (Grove Group) and Race #1 winner James Bergmuller (Porsche Centre Brighton).

Teams have a final 10-lap tomorrow afternoon as the curtain raiser to the F1 Grand Prix at 2.05pm.