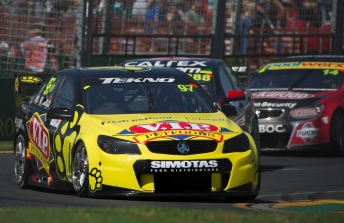 Van Gisbergen has been the dominant force all weekend

Kiwis Shane van Gisbergen and Fabian Coulthard will share the front-row for the final V8 Supercars race of the weekend at Albert Park under the accumulated points grid system.

Van Gisbergen has dominated the weekend to date and will be aiming to record a unique four-win sweep in the final.

Coulthard meanwhile has steadily improved, with fifth in Race 1 followed by third and second place finishes in the second and third hit-outs respectively.

The Red Bull Holden of Craig Lowndes and Valvoline Volvo of Scott McLaughlin will make-up the second row.

Van Gisbergen, Coulthard and McLaughlin will all be hoping to give New Zealand its eighth straight Albert Park V8 Supercars race win.

See below for the Race 4 grid

Next Story LIVE UPDATES: F1 and V8s at Albert Park