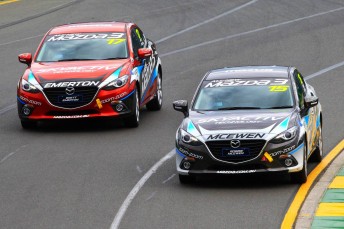 The race had to be cut short by one lap with McEwen leading former Socceroo Brett Emerton when Channel Nine Sports presenter Clint Stanaway made contact with former Miss Universe and rival network host Rachel Finch of Channel 7.

Finch rolled and crash into a concrete barrier.

“All of a sudden something clipped me from the back and the next thing I knew I was on my head spinning around in circles,” said Finch. Finch walked away from this rollover

“I felt completely relaxed; I knew the safety team were coming to get me.

“I’m just disappointed that I have to start from the back of the grid tomorrow!”

The event’s first rollover since Luke Darcy in 2008, safety crews were on the scene in seconds.

Finch exited the car with a smile, waving to the cheering crowd.

“I’m not the most popular guy around Albert Park at the moment as I just took out former Miss Universe Australia,” said Stanaway.

“I came into a corner when I lost control, hit the gravel, tried to correct, and lost control again before clipping Rachael. It was a bit of a comedy of errors to be honest. The sound her car made when it hit mine was enormous, but the main thing is that she is fine which I’m relieved about.”

“It was a massive battle between Brett and I today,” said McEwen.

“We knew it was going to be that way after the first day at Sandown as we were driving almost identical practice times. Today I was just waiting for an opportunity to pass, but also had to try not to hit him as we both really want to race tomorrow.”