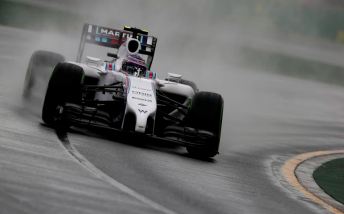 Bottas will start 15th after his penalty

The Rolex Australian Grand Prix grid has been finalised after gearbox penalties were issued to Valtteri Bottas and Esteban Gutierrez.

Williams driver Bottas was forced to under go a gearbox change after sitting out the majority of Free Practice 3, thus incurring a five place grid drop.

The Finn had qualified in 10th spot after an impressive drive in tricky wet conditions, but the subsequent penalty will drop him to 15th on the grid.

Sauber’s Gutierrez encountered a problem with his gearbox in Q1. The Mexican finished the session in 19th position but his penalty will demote him to 22nd and last on the grid.

Officials deemed Magnussen and Vettel to have slowed down sufficiently during the yellow flag period in Q2, while Alonso was cleared of impeding Gutierrez in Q1.

See below for the full Australian Grand Prix grid