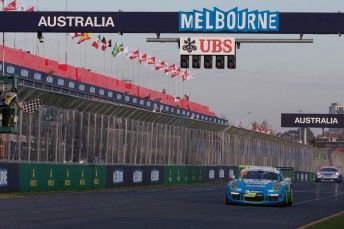 Steven Richards has started his weekend on the right note by winning the opening 10-lap encounter in the Porsche Carrera Cup Australia.

The Laser Plumbing & Electrical 911 driver battled with Warren Luff (No Second Chance/Phase 8) off the start, with Richards taking the lead while Nick Foster (Bob Jane T-Marts) slipped into third

The big battle was for fourth as Michael Patrizi (Onsite Rentals Racing) held out Shae Davies (Davbridge Constructions) and Craig Baird (Bonaire/Wilson Security). Davies made his way into fourth place on the second lap. Those positions were reversed with three laps remaining. 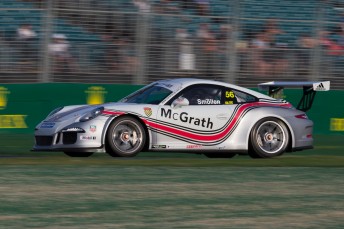 The AVCS Consulting 911 of Sam Power had a spin – with Nick McBride (Bob Jane T-Marts) just missing him. Then with two laps remaining Tony Walls (Objective Racing) slammed the fence at Turn 6.

Luff closed on Richards in the final stages, but didn’t quite have enough as Richards took his sixth individual race win in the series.

A good fight between McGrath Estate Agents 911 of Shane Smollen, James Bergmuller (Porsche Centre Brighton) and Tony Bates’ AFS/All Star Equipment Sales 911 in Elite. After slipping back at the start, Smollen got through on Bergmuller, who had his car back at his dealership for repairs after a p[practice accident.

The second race of the weekend will be held at 12.50pm on Saturday.