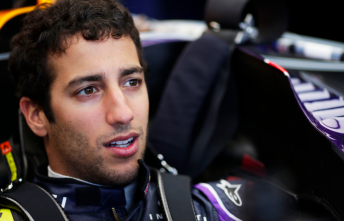 After a hectic week as the Australian Grand Prix’s new poster boy, Daniel Ricciardo will today take to the Albert Park street circuit for his first race weekend as a Red Bull Racing driver.

Groomed by the Austrian drinks giant for over almost a decade, the 24-year-old now faces arguably the greatest challenge in world motorsport; lining up as team-mate to Sebastian Vettel.

With major off-season rule changes having, at least temporarily, consigned to history Red Bull’s previous position of dominance, Ricciardo says he’s itching to get into the car for today’s practice.

“Speaking for all the drivers, I think we’re just curious and hanging out to get on the track this weekend and see where everyone stands and get a clearer picture,” he told media in Melbourne ahead of Friday practice.

“I’ve had a busy week leading up to the race and I’m probably more excited than anyone else right now to get in the car.”

Although the imposing presence of Vettel will be lurking in the next garage, Ricciardo insists that he’ll be focussing on his own program, at least in the early stages of the weekend.

“I think for now just focus on what I’ve done the last few years and keep doing what I’ve been doing to get to this point and then assess it from there and see how it’s going,” he said.

“Obviously I get a good view behind the scenes from the engineers of how Seb works with his guys and understand a little more through that as well, but for now it’s just do my thing and see where I stand off that and we’ll work from there.”

Vettel’s rocky relationship with Ricciardo’s compatriot Webber has been well documented, with the five years of the previous pairing punctuated by high-profile collisions and disputes.

The champion says he expects, however, to have an open team-mate relationship with Ricciardo, suggesting he will even be able to learn from the younger Australian.

“Obviously you do your own thing once you are in the car, but as a team we share everything that we experience and together with the engineers,” Vettel said when asked what advice he has given Ricciardo .

“People expect that if you come to a new team or if you have a new team-mate or you know a certain driver very well, people expect kind of questions like ‘how hard do you approach turn three in Australia’ or in Monaco. It’s not like that.

“Obviously everybody’s got his own style and even if I told him to brake here or there, then he would still try and find his own way.

“There are some things where I’m open so if he has some questions he can ask. It’s the same for me the other way round.

“I think I can learn a lot from him so obviously he’s a new guy, he has a different driving style to Mark.

“I didn’t see that much yet in testing because we didn’t run so much, but I’m sure, as the season goes on we’ll both learn from each other.”

See below for Speedcafe.com’s video interview with Ricciardo from earlier this week
)