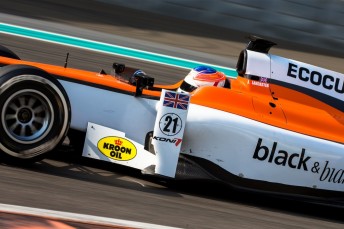 British driver Jon Lancaster laid down the fastest time on the final day of GP2 Series pre-season testing at the Yas Marina circuit in Abu Dhabi.

Lancaster produced the best time of the two sessions in the opening morning run, clocking 1:49.653s in his MP Motorsport machine.

Lancaster has not yet finalised his 2014 plans but hopes to continue to test for MP at the Bahrain tests next week.

He managed to shade Trident’s Johnny Cecotto who posted a 1:49.880s best.

Jolyon Palmer (DAMS) was third best in 1:49.972, the only time during the three-day best when he has been dislodged from the top of the time sheets.

Evans has been consistently in the top 10 across the three days of testing as he settles into his second season of GP2 after winning the 2012 GP3 title.

Stoffel Vandoorne (ART Grand Prix) had set the running early in the opening session before the red flag halted proceedings after Facu Regalia stopped at turn 19. Vandoorne would eventually finish sixth best in the morning.

The GP2 Series will now head to Sakhir for the second and final pre-season testing at the Bahrain International Circuit from March 19-21.

See below for comprehensive  Speedcafe.com guide to the Australian Grand Prix