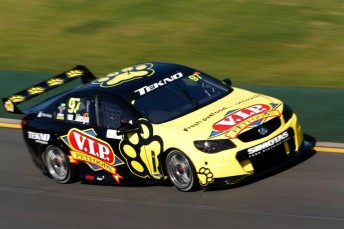 Shane van Gisbergen made it two wins from two starts by holding out Craig Lowndes in Race 2 of the MSS Security Challenge at Albert Park.

Lining up on pole thanks to his Race 1 success, the Tekno Autosports Holden driver made the best of the double-file rolling start to retain the lead into the opening corner.

He fought off the advances of Scott McLaughlin for the first half-lap, before the Volvo driver slipped to fifth by running wide at Turn 11.

Lowndes then took up the challenge, tracking Van Gisbergen before eventually having to settle for second.

Whincup had been forced to start seventh after copping a five-place grid penalty for forcing McLaughlin onto the grass in Race 1.

Chaz Mostert, Will Davison and Rick Kelly greeted the flag in ninth through 11th after all benefiting from a late-race James Moffat off at Turn 13.

The second Norton Nissan had run as high as sixth at the end of the opening lap before running wide while battling Tander’s Holden.

Tander again proved to be the only competitive Walkinshaw runner, with team-mates James Courtney, Nick Percat and Tim Slade finishing 15th through 17th.

A start motor failure on the grid then required a change and a pitlane start. He eventually finished a lap down in last place.

Next Story Hamilton bounces back with impressive FP2 pace