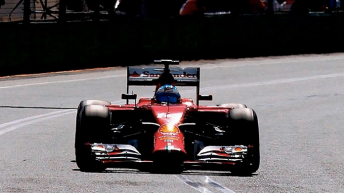 Fernando Alonso topped the times in the opening free practice session of the Rolex Australian Grand Prix as only 16 cars recorded lap times.

The Ferrari driver posted a best time of 1:31.840s, which was half a second faster than Jenson Button’s McLaren. The Williams of Valtteri Bottas crept into third with a last ditch effort in the 90 minute session.

The Renault powered cars enjoyed mixed results with the Red Bull of Daniel Ricciardo leading the way in fifth, just behind the other Williams of Felipe Massa.

The West Australian was two tenths of a second quicker than reigning world champion team-mate Sebastian Vettel in seventh.

Lewis Hamilton’s session lasted less than a lap as his Mercedes came to a halt on his first outing with a suspected sensor failure. Team mate Nico Rosberg enjoyed a problem free session and finished sixth fastest.

Toro Rosso managed to get both their cars into the top 15 but Caterham and Lotus suffered major dramas.

Ricciardo was first driver to set a flying lap as the field slowly emerged from the pit garages. The Red Bull set a string of fast laps without any problems.

It wasn’t long before his time was eclipsed as Alonso stormed to the top of the timesheets shortly after.

While Ricciardo continued to complete laps, his team mate Vettel remained in the garage and he only appeared in the second half of the session.

Once the four-times world champion finally ventured out on the track he was told by the team to complete five lap bursts. He ended the session in seventh spot just 0.953s adrift of Alonso’s best time.

Williams showed their pace in testing was no fluke as both Massa and Bottas produced consistent fast laps just a fraction off the pace of the leading Ferrari of Alonso.

Massa had held second for some time before both Button and Bottas surpassed the Brazilian late in the session.

Vergne and Danill Kvyat endured trips off the road but both drivers will be relatively pleased to finish the session 10th and 13th respectively.

Lotus failed to set a lap time with either Romain Grosjean or Pastor Maldonado as the E22 only made one appearance on track before problems struck.