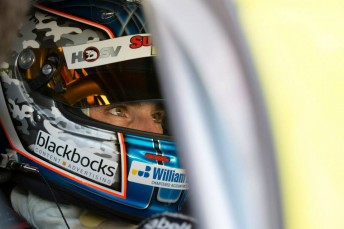 Walkinshaw Racing’s Tim Slade proved the fastest man as the V8 Supercars kicked off the serious track action with Practice 1 at Albert Park.

A 1:57.35s effort saw Slade knock early pace-setter Michael Caruso from the top of the order by just 0.07s with 10 of the session’s 30 minutes remaining.

Neither driver improved in their third and final runs, ensuring the former Erebus driver topped a session for the second time this year.

Volvo’s Scott McLaughlin moved to third in the closing minutes, while Nick Perat, Lee Holdsworth and Jason Bright rounded out the top six.

Bright had christened his brand new Brad Jones Racing Holden chassis with an excursion through the Turn 13 gravel trap in the early minutes.

Although only soft tyres will be used for the races, a mix of pre-marked softs and hards ensured a jumbled order.

Those down the pack included Fabian Coulthard, who endured multiple offs on the way to 17th, and Craig Lowndes, who was 20th after spending most of the session on hard compound rubber.

Slade was positive but well aware of the tyre implications following the session.

“It’s promising but it’s only practice and everyone is on different quality tyres,” he said.

“We know our tyres were relatively good and it’s a very tyre dependent circuit, so when you’re on good tyres you’ll be near the front.

“We’ll wait and see what happens in qualifying.”

Mark Winterbottom was the fastest Ford in eighth after a brief run on soft tyres at the end of the session.

Team-mate Chaz Mostert, who is in Ford Performance Racing’s spare car this weekend following his crash in Adelaide, rounded out the field having stuck with the harder rubber.

A second 30 minute practice will be held prior to qualifying.