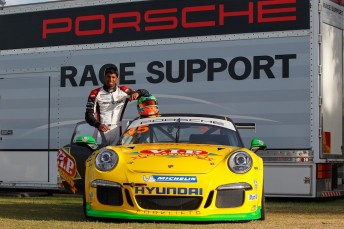 VIP Petfoods has announced a naming rights sponsorship with young driver Duvashen Padayachee on the eve of the second round of the 2014 Porsche Carrera Cup Australia Championship in Melbourne.

Padayachee, a consistent top 8 performer at the opening round in Adelaide almost two weeks ago, will see the #45 Carrera Cup car stickered with the well-known yellow and black paw-print themed corporate livery of the Queensland headquartered brand.

“I am very excited to have VIP Petfoods onboard as a major sponsor and to have the support from the Quinn family who are committed to supporting my future racing goals,” Padayachee said.

“To be associated with a brand that supports racing drivers such as Shane van Gisbergen (V8 Supercars) is a real honour and I look forward to achieving some great results with them in 2014.

Padayachee is confident of running competitively at the front of the Carrera Cup field with 23 racers engaged in practice and qualifying sessions at Albert Park today.

“I feel that I can run at the front of such a competitive series, such as Carrera Cup, and against some of the best drivers in Australia.

“Team BRM have a good handle on the new car, but now it is up to me to make the most of this opportunity and have a solid crack at the championship.”

There are three 10-lap Carrera Cup races scheduled across the grand prix weekend.