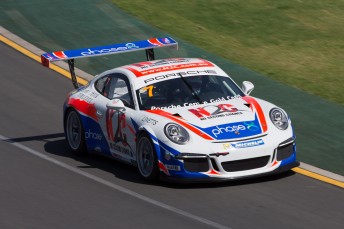 Warren Luff has backed-up his victory in Adelaide with pole position for this weekend’s second round of the Porsche Cars Australia Carrera Cup at Albert Park.

Driving the No Second Chance/Phone 8 Porsche, Luff set a lap record time of 1:57.7313. He had to hold his breath as Steven Richards in the Laser Plumbing & Electrical 911 came within 0.0875 on his final lap.

The session was stopped at the midway point when Tony Bates (Alternative Freight Services) tapped a tyre bundle and it was brought onto the racing line.

It meant the final minutes saw the times continue to tumble with different drivers sitting on the top of the time sheets.

Luff ran in tandem with team-mate Davies, and it appeared to pay off as the pair occupied the front row. Richards then went all out and came within a whisker of pole.

The first of three championship races in the Carrera Cup will be run at 6.20pm on Friday.

*See below comprehensive Speedcafe.com guide to the Australian Grand Prix