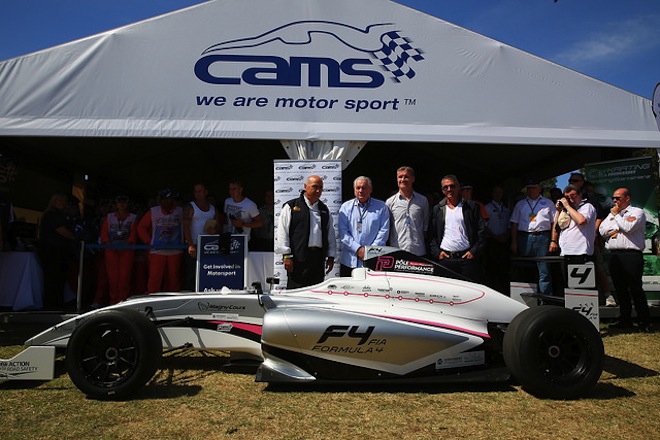 Papadopoulos, Jones, Coulthard and Doohan with the Mygale

The all new FIA approved Australian Formula 4 car aimed to help produce the nation’s next Formula 1 stars has been unveiled at Albert Park.

Details regarding the engine supplier and the whether the championship will be run internally or by teams are yet to be disclosed.

A decision on the format of the championship is expected to be made at the end of April.

CAMS president Andrew Papadopoulos believes the championship will be crucial in filling the void in the development processes of Australia’s future stars.

“I think it is the answer to a lot of our prayers we need something between karting and motor racing and this is specially designed for that,” Papadopoulos told Speedcafe.com

“Our kids can now spend a season here in this car and then go to Europe. In the past our categories here didn’t meet the standards of the European and now we get to start again.

“This is not about developing a car but the drivers of the future. Everyone will have the same machinery to work with and the ones with the skill sets will rise.”

The championship is at the moment open for tenders and the decision will be made by the administration and a few consultants.

“There are three models; centrally run, intermediate and team owned,” he said.

“We don’t know yet it will depend on what is decided as the best method for the sport.”

Next year’s inaugural calendar is also up for discussion.

However, Papadopulos has revealed he hopes the series will feature on the bill for next year’s Australian Grand Prix while appearing on the card of V8 Supercars events

“We hope so,” Papadopoulos added in regard  to Formula 4 featuring on the 2015 AGP schedule.

“They are a great looking car. It would be a fantastic incentive for the drivers.

“We are hoping to be on the V8 calendar with this so there will be the crowds and the television so therefore the incentive is there for the kids.”

The fleet of Formula 4 cars are expected to arrive in Australia in the second half of this year.