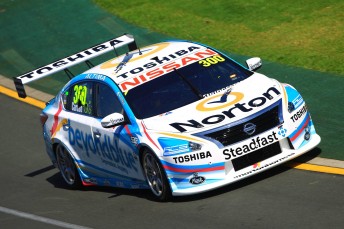 Michael Caruso set the fastest time in the second and final practice for the V8 Supercars at Albert Park ahead of this evening’s qualifying session.

Continuing the solid form that saw the beyondblue Nissan second in the opening session, Caruso moved 1.1s ahead of the pack by clocking a 1:56.24s lap with 10 minutes on the remaining.

Scott McLaughlin, who had been at the top for much of the session’s first half, responded with late fast laps of his own to end up third.

Jamie Whincup, Todd Kelly and Will Davison ensured that all five manufacturers were represented in the top six.

Like the opening hit-out, several drivers tasted the outfield during the 30 minutes without bringing out the red flags.

This evening’s 30 minute qualifying session will decide the grid for tomorrow’s opening race.