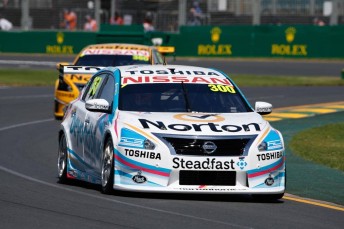 Michael Caruso has scored a maiden V8 Supercars pole position for himself and Japanese manufacturer Nissan ahead of Friday morning’s opening heat at Albert Park.

The leading contenders completed just two flying laps during the session, with Caruso sitting second to Van Gisbergen after the first tyre runs.

“This is my very first pole position and everyone is pretty happy and very proud,” said Caruso.

“It’s something we need to enjoy for the moment and then concentrate on the racing which starts tomorrow.

“To be honest, we have had to work on the package in the past 12 months to get to this point.

“It’s a credit to everyone on the engineering group and we work hard together as a four-car team.

“It is also nice to have your boss (Todd Kelly), who I also race against, be the first person to come over and congratulate you.”

Swede Robert Dahlgren was a competitive 11th in the second Volvo, less than 0.6s from Caruso’s pole time.

That put both Volvos ahead of the first Ford (Chaz Mostert in 12th) and the first Mercedes (Will Davison in 13th).

Davison’s team-mate Lee Holdsworth will start last after a slap of the Turn 9 exit wall ended his session early.

The V8 Supercars will tackle two races on Friday over 10 and 12 laps respectively.