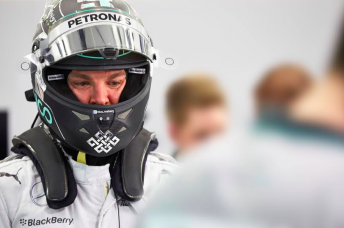 Nico Rosberg is shaping up for his strongest world championship tilt yet as the 2014 season gets underway in Melbourne.

The 28-year-old German enjoyed a breakthrough campaign last year after claiming victories in Monaco and Silverstone on his way to a career best sixth overall in the championship.

Following Mercedes’ impressive showing in pre-season testing, the son of 1982 world champion Keke Rosberg, is already being considered among the favourites to shine in 2014, as the sport incorporates radical technical regulations.

Rosberg gave his thoughts to media including Speedcafe.com in Melbourne ahead of the season opening Rolex Australian Grand Prix.

QUESTION: Nico, how are you feeling going into this race?

NICO ROSBERG: I’m feeling very confident after testing. The adrenaline is starting to build and it is going to be an exciting weekend.

QUESTION: Red Bull’s Christian Horner has said that Mercedes could win by a couple of laps and street the field, is that gamesmanship or is there any truth in that?

ROSBERG: You can never take those words to be 100 per cent true especially before the first race as you have to be very careful.

Last year Red Bull were nowhere in testing and then they came to Melbourne and were miles ahead of everybody but we’ll see.

QUESTION: Is reliability still a concern?

ROSBERG: For sure reliability is a concern for everybody and it will be tough to get to the end of the race. The team has done an amazing job so I’m confident we can do it.

QUESTION: What positives did you take out of testing?

ROSBERG: We learned a lot in testing because everything is new and the main thing was to do a lot of laps to get used to everything and ensure the reliability is good.

We could see where the problem areas are with the car and a lot of things were breaking for everyone, which is normal.

It has taken a lot of effort from everyone in the team and just before we left there were people working long into the night and early hours of the morning putting the engines together and producing the last few pieces to bring here. Its a very tough time.

QUESTION: Is anything possible this weekend given the rule changes and the changeable weather?

ROSBERG: Anything is possible. From the point of reliability for sure some cars will stop and probably some won’t even make it off the grid as they will break down before the green light.

To get to the end of the race is going to be a challenge.

QUESTION: Is there a lot for the drivers to deal with this year under the new regulations?

ROSBERG: One of the big challenges this year is going to be looking after fuel consumption during the race.

We have 100 kilos of fuel in the car which is one third less that what we had last year and thats going to be tough.

There are two things you can do. One thing you can do is engine management and the other way is the driver can drive more fuel efficiently by lifting off the throttle at the end of the straight and coast to the corner and brake afterwards.

Its an interesting direction and anew challenge with this extreme form of fuel saving that is going to be required.

QUESTION: Are the drivers generally happy with the rule changes?

ROSBERG: There are two sides to this. One is that the sport is more contemporary as it is more greener and efficient.

It is important as that is the direction the world is going in. Half of me is happy with that but the car is slower and I don’t like going slower so the other side of me is not so happy.

QUESTION: How do you go about beating somebody like (team-mate) Lewis Hamilton?

ROSBERG: It is always going to be tough to beat someone like Lewis but that is what I enjoy about this sport.

I have just got to prepare as good as I can and get the best out of every single area in my control.

It will be tough for our friendship if we are both fighting for the championship but for now its worked well.

We have been fighting for championships in go karts and that was no problem.

*See below for the comprehensive Speedcafe.com F1 guide to the Australian F1 Grand Prix