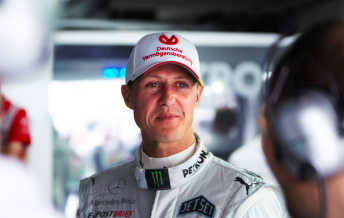 Michael Schumacher, pictured during his final F1 season in 2012

Michael Schumacher’s family remains confident that the former Formula 1 star will recover from his skiing accident, calling for patience in its latest statement on his condition.

The seven-time world champion has been in a medically induced coma for 11 weeks following a skiing accident in France on December 29.

Negative reports speculating on Schumacher’s condition have continued to swirl since the incident, with English newspaper The Daily Telegraph writing this week that “only a miracle” will now save the 45-year-old.

A statement issued today on behalf of Schumacher’s family stressed that they are expecting the already long fight to continue for some time.

“We are, and remain confident, Michael will pull through and will wake up,” the statement read.

“There sometimes are small, encouraging signs, but we also know this is the time to be very patient.

“Michael has suffered severe injuries. It is very hard to comprehend for all of us that Michael, who had overcome a lot of precarious situations in the past, has been hurt so terribly in such a banal situation.

“It was clear from the start this will be a long and hard fight for Michael, and we are taking this fight on together with the team of doctors, whom we fully trust.

“The length of the process is not the important part for us. It is heart-warming to see how much sympathy his family is shown and I can say the family is extremely grateful for it.”

This weekend’s Australian Grand Prix in Melbourne marks the first time that the Formula 1 community has gathered since Schumacher’s accident.

Race organisers are expected to play a video tribute to Schumacher on the circuit’s big screens while the cars are on the grid for Sunday’s race.

“We will pay tribute to Michael and we will send a message of support to Michael,” event CEO Andrew Westacott told News Ltd.

“The coming together of the Formula 1 family on the grid at a circuit that he won four times will be an important time for people to remember Michael at the start of a new season.”

There are four German drivers in this year’s field, with Sebastian Vettel, Nico Rosberg, Nico Hulkenberg and Adrian Sutil all returning for another season.

Rosberg, who was team-mates with Schumacher at Mercedes for three seasons from 2010, shared his well-wishes for his compatriot with media in Melbourne today.

“It’s been tough news for everybody including myself and my family,” he said.

“I just wish that he will make it and pull through. It will be tough… but I wish him and his family the best.”