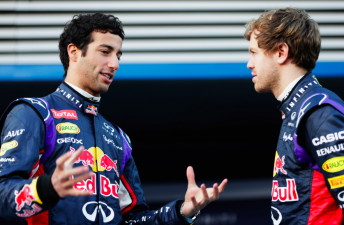 Ricciardo and Vettel during pre-season testing

Daniel Ricciardo admits that Red Bull Racing’s poor pre-season testing form has lowered the pressure to perform on debut with the champion squad at his home grand prix.

The 24-year-old is Australia’s sole hope at this year’s race following the retirement of former Red Bull driver Mark Webber.

While moving from junior team Toro Rosso to the main Red Bull squad alongside Sebastian Vettel is set to be the biggest challenge of Ricciardo’s career, expectations for the squad are at a six-year low following a troubled testing program.

The team’s RB10 completed less than half the test mileage of the class-leading Mercedes across the three pre-season tests as it struggled with reliability issues.

Renault’s 1.6 litre turbo powerplant and associated energy recovery systems have been blamed for much of the trouble, while designer Adrian Newey’s typically aggressive packaging has also caused headaches.

Ricciardo, who has yet to finish higher than seventh in his two and a half F1 seasons with Hispania and Toro Rosso, cedes that the unlikelihood of the Red Bull being on the pace this weekend has made for a more relaxed build-up.

“It probably does, not that I would wish for it, but considering the winter testing we’ve had, we’re not as optimistic as maybe we thought we would be,” said Ricciardo of reduced pressure.

“In that respect it probably downplays it a little bit and the pressure has probably dropped a notch or so.

“At the same time I’d love to fight for that top spot. We’ll do what we can.”

The former British Formula 3 champion insists, however, that the team has not panicked and will claw back the lost ground in the coming races.

“I’ve been impressed with the composure,” he said of the team’s efforts.

“They know they’ve got work to do and they’re just getting on with it.

“They’re not letting emotion get the best of them. It’s just ‘this is the situation, we’ve got work to do, let’s do it’. That’s been the mentality.

“I think the car is a good base,” he continued.

“I think Red Bull, with the people they’ve got and the experience they’ve got, should produce a pretty competitive car.

“I’m sure once we really get running we’ll be up there, but it’s step-by-step for now.”

Fifth place for Webber in the 2002 and 2005 Albert Park races has been the best finish for a local driver in the Australian Grand Prix since it joined the Formula 1 World Championship in 1985.

Check back to Speedcafe.com this evening for a full pre-AGP video interview with Ricciardo