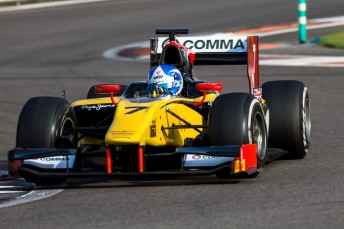 Briton Jolyon Palmer has set the benchmark on the opening pre-season test day for the GP2 Series at the Yas Marina circuit.

The three-day test comprises of a morning and an afternoon session with DAMS driver Palmer leaving it until the dying stages to post a 1:49.126s lap.

He had earlier clocked the third quickest time in the morning run.

Kiwi star Mitch Evans, who had finished 10th in the morning session that was topped by EQ8 Caterham Racing’s Rio Haryanto, improved his time in the afternoon to finish second quickest in 1:49.292s after turning only 13 laps compared with the 24 completed by Palmer.

The second DAMS driver Stephane Richelmi was third fastest in the afternoon in
1:49.756s.

Rookie Axcil Jefferies (Trident) brought out a final red flag late in the session after spinning and stopping at turn 19.