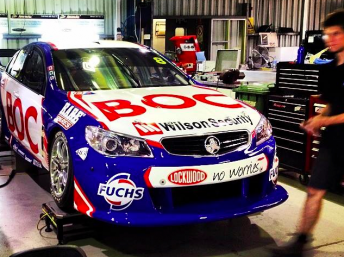 The Albury-based team has spent the week building up its spare chassis following Bright’s car-destroying crash at the Clipsal 500.

BJR’s workshop crew had the partially-complete spare in its fabrication shop by 5:00am on the Monday after Adelaide, undertaking a full day of fab work before the painting and fit-out could begin.

The car’s shakedown will take place at the Wodonga TAFE’s driver training facility, where BJR has previously run-in new cars.

Andrew Jones will be behind the wheel for the maximum 60km of running due to previous commitments for Bright.

The new car will sport the new VF road-car inspired dashboard seen on the Red Bull and James Courtney Holdens in Adelaide, as well as rear-end modifications allowed from mid-last year to improve chassis repairability.

“It’s good that we’ll get to shake the car down before heading to the Grand Prix,” Bright told Speedcafe.com.

“We had hoped to do it on Monday but that didn’t eventuate, so Andrew will do the driving for me.

“The car should feel the same as the last one. I don’t think there’ll be any surprises when I jump in at Albert Park.

“We had quick cars there last year so hopefully we can have a good weekend and keep out of trouble.” Bright with fan Brodie at the BJR workshop

The crash was a dramatic end to a mixed weekend for Bright at the Clipsal 500 that had seen 13th and fourth place qualifying efforts yield eighth and 21st place finishes in the respective Saturday races.

A slow pitstop and a broken anti roll-bar had scuttled hopes of a strong result in the second encounter, and ensure he sits just 21st in points after the event.

Although a shocking Clipsal 500 in 2013 saw Bright stressing the importance of a clean run at the season-opener this year, the former Bathurst winner says he’s looking on the positive side.

“It was disappointing not coming out of there with as many points as we should of, but I’m further up coming out of there than I was last year, so I consider it a step in the right direction!” he said, having sat 26th in points following Adelaide in 2013.

Bright visited BJR for a pre-Albert Park briefing on Monday, where he met with a nine-year-old fan who had sent $10.20 of his pocket money to the team in order to contribute to the rebuild.

The fan, Brodie Pearson of Wangaratta, was presented with a signed door from the wreckage for his donation.

“The great thing about kids is they don’t hold back, they tell you exactly what they’re thinking,” said Bright.

“That’s what we saw there. He just wanted to make sure his favourite team was going to be on the track again, especially for his home round at Winton.”

The team has made the most of the rebuild on its social media channels, documenting the process via a series of videos.

It is also offering fans who show support on its Facebook page the chance to have their name on the car at Albert Park.

Next Story Spotlight on double-file rolling starts at AGP