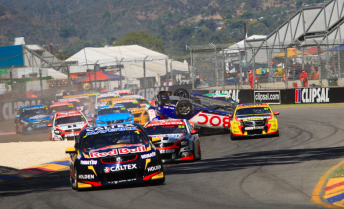 The merits of the Acceleration Zone were a hot topic after Adelaide. pic: Peter Bury

The use of double-file rolling starts at Albert Park is set to test the patience of V8 Supercar drivers following the restart carnage seen at the Clipsal 500.

The latest in a succession of format trials seen at the non-championship event, the weekend will mark the first time that the category has used rolling starts for its races.

In addition to the starts themselves, Albert Park will also see the double-file rolling process used for Safety Car restarts.

The double-file format mimics that used to kick-off the second half of the 60/60 Super Sprint races last year, where the Acceleration Zone concept was introduced.

It was the adaptation of the Acceleration Zone to the single-file Safety Car restart procedure that caused the controversy in Adelaide.

As at the Clipsal 500, the leader must travel at between 50 and 60km/h before entering the Acceleration Zone, at which point he can accelerate away.

All following cars, including the driver on the outside of the front-row, must also stay in formation and below 60km/h until the leader has accelerated.

The incident that destroyed Jason Bright’s Holden in Adelaide had occurred after a restart that saw leaders Shane van Gisbergen and Rick Kelly both break ranks early.

Third-placed Jamie Whincup correctly held his car below 60km/h until the leader had entered the Acceleration Zone, causing a bunching of the pack behind.

Instantly wiping five cars out of contention, the crash triggered widespread calls for the Acceleration Zone system to be abolished.

Regardless, drivers are hoping that the relatively wide-open spaces of Albert Park will reduce the chances for chaos this weekend.

Although “not a fan” of the Acceleration Zone, Adelaide victim Bright is downplaying fears of more accidents in Melbourne.

“The reason why the Adelaide one was so bad is that the two guys at the front messed up and accelerated when they shouldn’t have,” he told Speedcafe.com.

“That was the biggest problem because the rest of us in single file couldn’t see what was going on and were relying on our engineers to tell us when to go.

“If anything the double-file ones (restarts) last year were very tame on the whole and a big part of that is because you can see what’s going on.

“If you’re double-file you can see further up the field to see when the front is going rather than just relying on your engineer.”

Whincup, meanwhile, has also stressed the benefit of starting at the front of the pack.

“Restarts are a big topic of conversation at the moment so all eyes will be on the double-file rolling starts this weekend,” he said in a team preview.

“Saying that though, everyone predicted carnage before every rolling restart last year and most of the time it was fine. Like always it will pay to start up the front.”

James Moffat, who took victory in the 60/60 race at Winton last year by sweeping around the outside of his Nissan team-mate Michael Caruso on the double-file restart, also emphasised the importance of starting near the front.

“The rolling start element is not something new to us, but clearly it’s new for the grand prix and I think it will add some excitement for the fans as we all bomb into Turn 1 three or four wide,” he said.

“We need to be on top of the restarts. Ideally, we need to qualify well and be up the front of the field, which will reduce the chance of being involved in the mess.”

Track action for the V8 Supercars kicks off on Thursday, where two 30 minute practice sessions will be followed by a 30 minute qualifying hit-out in the evening.

Four races will be contested over the weekend, with 10 and 12 lap races on Friday, followed by 12 laps each on Saturday and Sunday.

The Thursday qualifying session will set the grid for Race 1, with the Race 2 and Race 3 grids then set on the results of Races 1 and 2 respectively.

The starting order for the finale will be calculated from the combined points across the opening three heats.

Unlike all other V8 Supercars meetings, an overall weekend winner will be awarded, with the final race worth double the points of each of the opening three.

Each car will receive 16 soft tyres for the weekend, with a further eight pre-marked tyres of either compound allowed for practice.