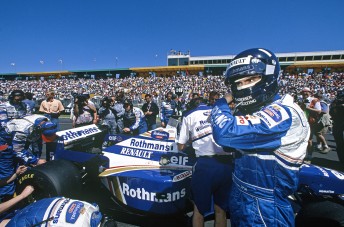 In the second of a five-part series celebrating this year’s 30th running of the Australian World Championship Formula 1 Grand Prix, we look back at how Melbourne captured the race and produced its own memories.

“A great place for a motor race” was the slogan that welcomed the Australian Grand Prix as the event found a new home in Melbourne.

Over the years, Albert Park has become synonymous with thundering F1 engines for one weekend a year.

However, its journey from burgeoning venue to the undisputed home of the Australian Grand Prix encountered many twists and turns akin to the 19 races it has witnessed.

F1 had established itself in Adelaide from 1985-1995 but the city’s grip on the race had loosened due to the rising costs to host such an iconic global sporting event.

In 1993, businessman Ron Walker, working alongside the Jeff Kennett led Liberal government, put a bid together to wrestle the race from Adelaide. Shortly after the South Australian election that year a deal was announced that the Australian Grand Prix would move to a race track constructed in and around Melbourne’s Albert Park. 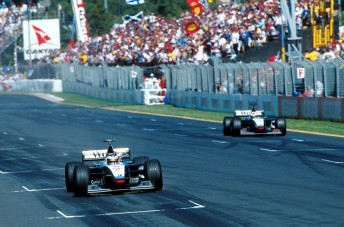 Hakkinen leads Coulthard to the flag in 1998

The move marked a return of the AGP to the picturesque location, with the 1953 and 1956 races having been held at the venue.

It is thought that Melbourne’s unsuccessful quest to stage the 1996 Olympic Games, and Sydney’s successful bid to host the 2000 Games was a driving force behind the city’s thirst for F1.

The move was controversial with Adelaide citizens still bitter about the decision today, claiming Melbourne “stole” the Australian Grand Prix from them. The announcement didn’t go down too well in Melbourne initially either.

Protests were held and a “Save Albert Park” group in a bid to stop the event and preserve the state of the public park.

Fears surrounding the cost and benefit of hosting the event were also raised and have continued to be a hot topic throughout the race’s tenure.

Despite the initial animosity, 400,000 people poured through the gates for the first event at the newly constructed 16 turn, 5.3km Albert Park circuit in 1996, held just four months after Adelaide’s final bow the previous November.

In a change to tradition, the AGP’s new home came with a new slot on the calendar. Instead of the final event, Albert Park became the first event of the season and has been ever since, apart from 2006 and 2010 editions. 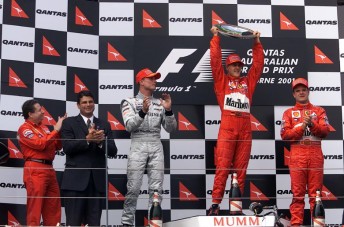 Michael Schumacher took the second of his four wins in 2001

The maiden Grand Prix was one of the most memorable as Damon Hill managed to hold off team mate Jacques Villeneuve on his F1 debut, to record a Williams one-two.

Although Hill took the spoils, the race was barely 30 seconds old when its first unusual incident occurred, setting the tone for the future.

Jordan’s Martin Brundle was launched into a violent barrel roll at turn three after contact with McLaren’s David Coulthard and Sauber’s Johnny Herbert. The Brit amazingly walked away unscathed and even jumped into the spare car for the restart, in a moment which has enjoyed countless replays.

Brundle’s accident was just the beginning of many iconic moments as the Grand Prix became famous for races dominated by controversial incidents, Safety Cars and changeable weather conditions, resulting in largely unpredictable races.

McLaren was accused of bringing the sport into disrepute in 1998 when Coulthard, who had been leading the majority of the race, was forced to pull over with two laps remaining and let team-mate Mika Hakkinen take the victory.

McLaren had a pre-race agreement that whoever made it to the first corner in the lead on lap one would be allowed to win. Surprising results have been a trait of Albert Park with Eddie Irvine recording his maiden victory for Ferrari in 1999.

Giancarlo Fisichella triumphed for his only win in 2005, after profiting form a topsy turvy grid caused by a storm-hit qualifying.

Four years after Fisichella’s moment in the sun, Jenson Button picked up the first of his three Australian Grand Prix wins when he led a Brawn GP one-two in the team’s very first outing.

Headed by Ross Brawn, the squad was formed just months ahead of the race following the withdrawal of Honda. Button would later triumph in changeable weather conditions in 2010 and the Safety Car hit 2012 edition.

However, a first corner crash in 2002 that saw Ralf Schumacher launched into a horrendous airborne accident triggered arguably the most surprising result for then debutant Mark Webber.

The incident wiped out 11 of the 22 cars which in turn helped Webber in the underpowered and underfunded Minardi claim a rare points finish in fifth. While Melbourne has thrown up its fair share of surprises, F1’s elite have also managed to shine through at Albert Park.

Most notably, seven-times world champion Michael Schumacher stormed to victories on three consecutive occasions from 2000-2002. He added a fourth victory in 2004.

His 2001 victory was sadly tinged by the tragic death of marshal Graham Beveridge, who was struck by an errant wheel from Villeneuve’s out of control BAR.

In all, 11 of the 19 winners in Melbourne have gone on to take out that year’s championship.

Tomorrow: Part 3 – A pictorial history of the F1 AGP