Mansell slows with a deflated tyre in 1986

Ahead of the 30th running of the Formula 1 Australian Grand Prix in World Championship form, this week’s Pirtek Poll looks back at the most memorable moments in the race’s history.

The team at Speedcafe.com has narrowed down three-decades of F1 action into 10 nominations, covering the full gambit of wins, controversies, incidents and Aussie triumph.

Read up on each nomination before casting your vote in the Pirtek Poll at the bottom of the story.

It is perhaps the most lasting image for Formula 1’s time in Adelaide.

British hero Nigel Mansell, seemingly on his way to a maiden world title, wrestling his Williams down the Brabham Straight with a left-rear tyre in tatters.

When the sparks settled, Mansell was out and Alain Prost was left to defeat Nelson Piquet for both the race win and the championship.

Unlike 1989, the weather was this time so bad that only 14 racing laps were run. It remains to this day the shortest race in F1 history.

In 1992, the previously dominant Senna-McLaren/McLaren combination proved no match for Nigel Mansell and his high-tech Williams-Renault.

Winning nine of the 15 races ensured Mansell had already secured the title when he lined up on pole in Adelaide.

Senna kept pace with his rival during the opening 19 laps before a mistake at the final corner saw the McLaren centre-punch the rear of the Williams, dramatically sending both spinning out of the race. 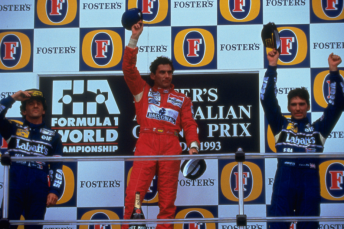 Senna’s final race with McLaren after a six-year partnership landed a pole and a race win.

It was Senna’s only pole for the season after again being out-gunned by the might of Williams-Renault.

The result ensured Senna had one last victory over 1993 champion Alain Prost before the Frenchman’s retirement, and one last win before the Brazilian’s death the following April.

It was only fitting that such a tempestuous championship campaign would end in a thunderclap of controversy for Michael Schumacher.

Following a succession of dramas over fuel rig tampering, alleged traction control, a ride-height miscalculation (that saw a DSQ at Spa) and breaking ranks on the warm-up lap at Silverstone (which yielded a two-race ban), Schumacher and Benetton arrived at the finale one point ahead of Damon Hill.

Schumacher led early before slipping off at Turn 5. Hill saw his chance as the German rejoined, but found the door slammed in his face. Both cars out. Schumacher champion.

Adelaide’s Grand Finale is remembered as one of Formula 1’s great weekends, with a packed house of local fans saying goodbye to the championship, and the paddock stalwarts bidding likewise to a favourite city.

It could, however, have been so different. A tyre failure for Mika Hakkinen on Friday had pitched the Finn into the tyre barrier at Brewery Bend with sickening speed

Critically injured, Hakkinen’s life was only saved by an emergency tracheotomy performed trackside. He returned to the championship the following season, and went on to win the world title in 1998 and 1999. 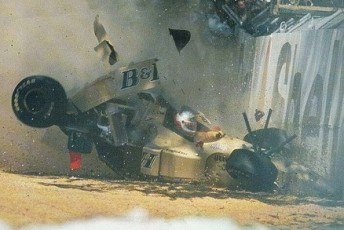 The first Australian Grand Prix to be held in Melbourne was merely 30 seconds old when Martin Brundle’s Jordan spectacularly brought out the red flags.

In frightening scenes, Bundle’s Jordan catapulted over the top of David Coulthard’s McLaren and Johnny Herbert’s Sauber before greeting the outside wall upside down.

Bravely, the Briton jogged back down pitlane in order to jump in the team’s spare car for the restart.

An early engine failure for Ferrari’s Michael Schumacher paved the way for McLaren team-mates David Coulthard and Mika Hakkinen to enjoy a trouble-free season-opener. Or so it looked.

A communication error saw leader Hakkinen erroneously head to pitlane from the lead mid-race. Acting under a pre-existing deal between the two drivers giving he who had led into the first corner preference, Coulthard later slowed on the front-straight to allow the Finn back through for the win.

The actions saw an official complaint from AGP organisers to the FIA, and a subsequent FIA World Motor Sport Council threat to severely punish any team to flaunt such orders in future.

Never before or since had a fifth place finish been celebrated so hard. Having ground his way through the junior open-wheel and sportscar ranks, Mark Webber’s result on debut in F1 truly was what dreams are made of. 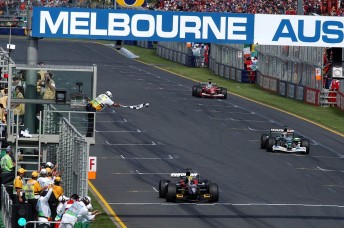 Webber takes the flag fifth in 2002

The two points were made all the sweeter for the fact that Webber had achieved the feat with cash-strapped minnows Minardi, which at that stage was owned by Australian Paul Stoddart.

The result had been set up by another memorable moment at the start of the race; a spectacular clash between Ralf Schumacher and Rubens Barrichello that instantly took eight cars out of the fight.

Just months earlier, Jenson Button had been expecting to watch the AGP from his couch in England following the withdrawal from Formula 1 of Japanese giant Honda.

From those ashes, however, rose former Honda team principal Ross Brawn and a double-diffuser equipped, Brawn-labelled, chassis that raised eyebrows in testing.

Far from a sponsor-hunting winter trophy dash, the testing pace proved all too real for Brawn’s rivals, with Button taking the Albert Park win and eventually the world title.

CLICK HERE for today’s first instalment of our look back at 30 years of the AGP, covering the Adelaide years.

Next Story Analyst: Alonso is F1’s most marketable racer