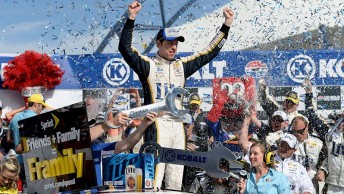 Brad Keselowski has driven by a spluttering Dale Earnhardt Jr. on the final lap to win the Kobalt 400 at Las Vegas Motor Speedway.

The Penske driver led a total of 52 laps, but none of them mattered more than the last half of a lap when Earnhardt Jr’s Chevrolet ran out of fuel. Ironically both drivers have finished in the top-3 in each of the opening three races, Earnhardt Jr. no worse than second.

The race featured long green-flag runs, with only three caution periods throughout the race. It also set-up a fuel strategy situation where Earnhardt Jr. gambled on the final caution to stay out, while Keselowski pitted. The Ford driver coming through to be on the bumper of the Chevrolet when it coughed on the back stretch.

“We found every way we could to make it hard,” said Keselowski.

“This Ford was flying today. These races aren’t getting any easier to win. I drove as hard as I could, every lap.”

Former Ford Performance Racing engineer James Small left Las Vegas with a smile after being part of the team that steered Paul Menard to third place.

The news was somewhat tougher for Marcos Ambrose who had to start at the rear of the 43-car field after issues in qualifying; he brought his Richard Petty Ford home in 24th.

Next week the NASCAR Sprint Cup heads to Tennessee and 160,000 seat half-mile at Bristol for the Food City 500.