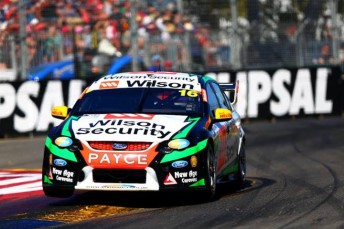 Scott Pye admits that he’ll enter the remainder of the V8 Supercars season with raised expectations following his strong turn of pace at the Clipsal 500.

Before being taken out of Race 3 in the early restart melee, the former Lucas Dumbrell Motorsport driver had been one of the stars of Saturday’s two races.

The Wilson Security Ford was then running an outstanding fifth in Race 2 before being turned around by Shane van Gisbergen.

“It was good to be able to show my potential in Adelaide,” Pye told Speedcafe.com.

“Every year you try and come in without expectations, you just want to see how it pans out.

“Even I didn’t know what my potential was really because I don’t think I had the car last year.

“This year I think there are some race skills on my part that I can work on now because it’s great to be racing further up the field.

“The guys at the front are a lot more technical, it’s not as scrappy as when you’re down the back.

“I’m looking forward to racing around guys like Craig (Lowndes), Jamie (Whincup) and Garth (Tander) a lot more and learning as much as I can.

“I’ve still got a lot to learn, but my expectations now are to be in the top 10 consistently.”

The Race 3 incident ensures that Pye sits just 22nd in points after Adelaide, meaning he will need to score solid results in the coming races to climb back up the standings.

“When you look at a guy like Fabian (Coulthard), he is second in the championship but wasn’t happy with his car all weekend in Adelaide,” added Pye.

“We were quick but didn’t get the points. Hopefully we can continue to show the speed and get some points on the board.”

Pye’s Falcon has been rebuilt by DJR ahead of this weekend’s non-championship races at Albert Park’s Australian Formula 1 Grand Prix meeting.