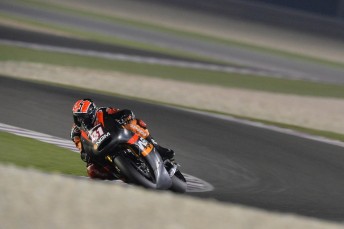 Spanish brothers Aleix and Pol Espargaro have topped the time sheets of the final pre-season test ahead of the MotoGP season, but one was left injured after a late evening crash in Qatar.

Aleix was the fastest rider just ahead of his younger brother Pol, who suffered a broken collarbone after falling from his Tech3 Yamaha.

Aleix has been the standout performer of the testing period – showing the potential of his ‘Open’ entry Yamaha for the NGM Mobile Forward Racing team. He set the best time of the three day Qatar test with a 1:54.874. That time was less than 0.2s off Jorge Lorenzo’s 2013 pole lap at the Losail Circuit and Espargaro also looked strong in a race simulation which he carried out late on the final day.

Moto2 World Champion, Pol, was just 0.033s behind, but attention switched to his injury after he crashed at turn 6. The extent of his injury is still under examination – he faces surgery in Barcelona tomorrow.

On the other side of the Tech 3 garage, Englishman Bradley Smith has a year of MotoGP racing under his belt and having finished third. Smith escaped unhurt from a mid evening spill from his Yamaha YZR-M1.

After the three Yamahas at the top of the timesheet, Honda riders Stefan Bradl and Alvaro Bautista were fourth and fifth respectively. None of the factory Honda, Yamaha or Ducati riders took part in this test as they had been at Phillip Island last week for tyre testing.

There is a Moto2 and Moto3 test this week at Jerez (Spain) ahead of the Grand Prix of Qatar on 23 March.