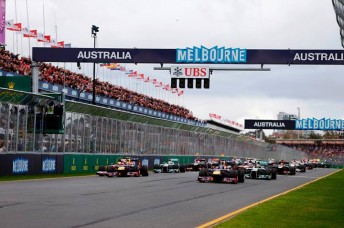 Formula 1 pundit Martin Brundle is expecting a “chaotic” Rolex Australian Grand Prix as teams scramble to get on top of the biggest technical shake-up the sport has experienced.

The distinguished broadcaster has told Speedcafe.com that this weekend’s season opener in Melbourne will be a wild affair, predicating a high rate of attrition and a surprise winner, as teams battle reliability issues to reach the chequered flag.

The F1 pecking order has been turned on its head as a result of the sport’s most radical regulation changes in its 60 year history.

Significant tweaks have also been made to the aerodynamics of the cars, most notably around the nose and front wing areas.

“I have never seen a lead-up to a season as crazy as this.

“I think it is going to be calamity in the beginning and we don’t know who is going to get to the end.

“We won’t be reading out the podium with five laps to go, thats for sure.”

Pre-season testing has produced a wealth of reliability concerns for teams which has forced the paddock to go “back-to-basics”, according to Brundle, who is tipping Mercedes and Ferrari to star at Albert Park.

Mercedes heads into the race as favourites with Lewis Hamilton and Nico Rsberg setting the pace while banking nearly 5,000km untroubled laps.

“Its back to basics really,” said Brundle.

“I think the teams have been so busy just trying to get the cars going round the track that all the niceties and fine tuning on strategies and tyre use have gone out the window for most teams.

“The two teams I think will be strongest are Mercedes and Ferrari because they are developing their own power pack for their own team.

“However as the Mercedes works team showed in testing reliability is still an issue for everybody and It would be no surprise if a Mercedes powered Force India or Williams won one for the first races.”

Reigning world champions Red Bull created the majority of headlines in testing after encountering a series of issues with their new RB10, which is yet to complete a race distance.

An aggressive design on the packaging has resulted in Sebastian Vettel and Daniel Ricciardo’s car catching fire amid serious concerns over the reliability and speed of the new Renault engine.

The team have clocked only 1,711km in three four day test sessions.

“I think it is going to take Red Bull a while to get on top of their car,” added Brundle.

“The car will be quick and you can’t underestimate them as it is long season.

“It will depend on what they turn up with in Melbourne but I would be amazed if Red Bull get on it inside the first half dozen races.”

However, Red Bull’s woes could be a blessing in disguise for Ricciardo as he prepares to got head-to-head with four-time world champion Vettel.

“I think Ricciardo is going to be just fine this year,” said Brundle.

“In a way he has the worst job in the sport to be Sebastian Vettel’s team-mate. If it was a continuation of the regulations from last season I would have said he would have his work cut out.

“Daniel has got his chance now and crucially the new rules have given him this reset even if it may not feel like for a few races.”

For a full preview of the 2014 F1 season with Martin Brundle look out for Speedcafe.com’s F1 Race Guide later this week.