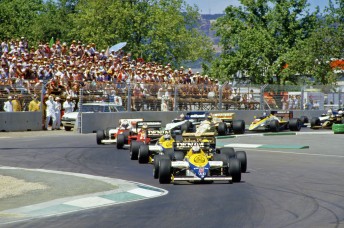 In the first of a five-part series celebrating this year’s 30th running of the Australian World Championship Formula 1 Grand Prix, we look back at the race’s first 11 years in Adelaide.

The history of the AGP itself stretches all the way back to the late 1920s, having been held in various locations around the country.

But it was not until 1985 that Australia was awarded its first officially ratified FIA F1 world championship grand prix.

This year, the Formula 1 Rolex Australian Grand Prix celebrates its 30th running having become one of the most significant on the calendar.

The event has called Melbourne’s Albert Park home since 1996, but it’s very existence and popularity owes itself largely to its birthplace on the streets of Adelaide.

The very idea of luring F1 to Adelaide belonged to businessman Bill O’Gorman, who had the vision to improve the image of the city in the early 1980s.

It didn’t take long for South Australia’s Premier John Bannon to get behind the concept and the pair flew to London to meet F1 supremo Bernie Ecclestone. 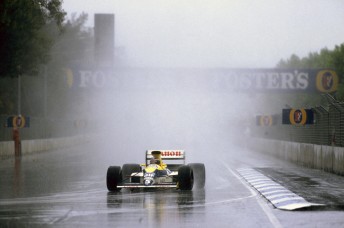 The result of the meeting was an initial seven-year contract to bring F1 to Adelaide, beginning in 1985.

Work begun on the construction of a world class race track under the leadership of senior civil servant Dr Mal Hemmerling.

The outcome was a fast and challenging 3.7km street circuit taking in both genuine city roads and a small, purpose built, loop in the Adelaide Parklands.

The city embraced the sport with more than 200,000 witnessing the world’s most revered drivers across the weekend.

Finland’s Keke Rosberg etched his name in history as the first winner for the F1 Australian Grand Prix for Williams.

Brazilian Ayrton Senna wowed crowds with an edge-of-your-seat effort to earn pole position in the Lotus, but an engine failure whilst in the lead handed Rosberg the win.

It was a race of attrition with only eight of the 26 starters reaching the chequered flag.

One of those failing to finish was Niki Lauda, who briefly led the race before falling foul of brake trouble and crashing out of his final GP. 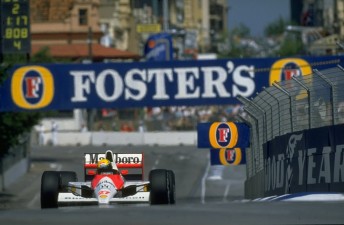 While the inaugural race itself had proven to be a largely pedestrian affair, the second running went down as one of the most dramatic on record.

The final event of the 1986 season was to decide the title with Nigel Mansell (Williams), Nelson Piquet (Williams) and Alain Prost (McLaren) all in contention.

The race came down to a battle between Prost and Mansell for the lead after Rosberg surrendered his position at the front with a tyre failure.

On lap 64, drama struck for Mansell as his left rear tyre exploded sending him out of the race.

Had Mansell’s accident forced him into the wall, the race would probably have been red flagged which would have given him the championship.

Austrian Gerhard Berger stormed to victory in 1987 while Prost beat Senna to the top step of the podium the following year in the all conquering McLaren Hondas. 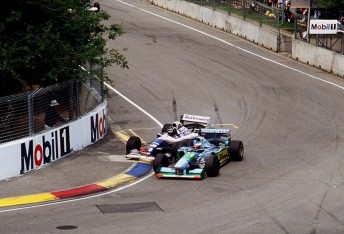 Torrential rain then grabbed the headlines in 1989 as Belgian Thierry Boutsen scored only his second Grand Prix win of his career for Williams.

Prost pulled out of the race after just one lap due to the conditions, which claimed the majority of the field.

McLaren team-mate Senna crashed into backmarker Martin Brundle while handsomely in the lead, which handed Boutsen the victory.

Senna once again came close to the top step of the podium in 1990 when a gearbox failure forced the polesitter into retirement from the lead.

As a result, Benetton’s Piquet claimed the victory from Ferrari duo of Mansell and Prost.

In 1991, Senna finally triumphed. However, it was in bizarre circumstances as heavy rain curtailed the proceedings after only 14 laps.

Half points were awarded for what to this day remains the shortest race in F1 history.

Berger recorded his second Adelaide victory in 1992 as he held off a young Michael Schumacher to the flag.

The 1993 edition will forever be remembered as Senna’s final F1 victory.

The three-times world champion produced one of the drives of his career to guide an underpowered McLaren to the top step of the podium, ahead of the championship winning Williams Renaults of Prost and Damon Hill.

One of the most controversial incidents in the sport’s history then occurred at Adelaide in 1994 with the event deciding the world championship for a second time.

Hill and Schumacher went head-to-head for the title quite literally as the pair collided on lap 36 when the German, recovering from an off track excursion, turned into the Brit, who attempted a pass for the lead.

Both retired from the race with Schumacher winning his first world title by a solitary point.

With government funds tightening in South Australia, the 1995 meeting was the last Grand Prix in Adelaide.

A deal had been struck in late 1993 to take the event to Melbourne from 1996 onwards. The final edition was not short of drama.

In practice McLaren’s Mika Hakkinen encountered a huge crash due to a tyre failure, which resulted in the Finn requiring a life-saving tracheotomy trackside which was performed by Professor Syd Watkins.

As Hakkinen remained in hospital, Damon Hill won an attrition-hit Adelaide finale for Williams in front of a monster F1 crowd of 210,000.