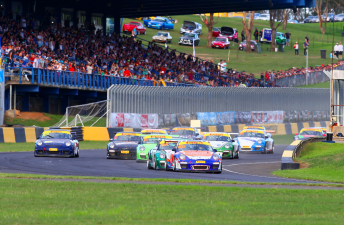 Fraser Ross has scored his maiden GT3 Cup Challenge race and round victories in the 2014 season opener at Sydney Motorsport Park.

Running alongside the Top Gear Festival, the category’s 17 car field took on a trio of 14 lap races.

The 23-year-old Ross scored victory in the opening two races before finishing second to Jon McCorkindale in the last.

Failing to finish Race 1 after running out of fuel in the closing stages, McCorkindale had fought from last to second in Race 2.

Consistency across the three races saw Peter Fitzgerald and Tony Walls join Ross on the round podium.

“I can’t explain how happy I am with the round win,” said Ross.

“This has been a long time coming and I feel the team has really working really well together this weekend.

“I don’t want to jinx myself but I think I’m a contender this year. Obviously this category always has amazing talent in it and this year it no different.

“These new cars in GT3 Cup Challenge suit my driving style and I love the greater horsepower and rear-end grip.”

The second round of the season will take place with the opening round of the Shannons Nationals at Sandown on March 29-30.

Previous Story Formula 4 to be unveiled at Albert Park