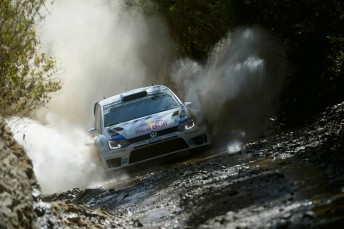 Sebastien Ogier has a handy lead in Mexico

Sebastien Ogier has extended his lead in Rally Mexico while Chris Atkinson also improved to seventh overall despite sweeping the roads outside Leon.

With an extended lead, Ogier admitted he could afford to control his pace, while Latvala was second fastest in both stages. 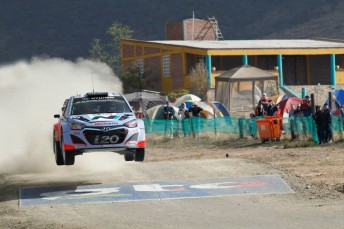 Atkinson has jumped to seventh overall

The VW duo have a comfortable cushion over Thierry Neuville, who is 3min 51.6.sec off the lead in third in a Hyundai i20.

Meanwhile Atkinson in the other Hyundai i20 has had a steady morning improving from eighth to seventh overall. This despite being the first on the road and cleaning the line for the others that are behind. The Aussie also working on set-up changes in his i20 as the team continues to learn the new car on what is its first outing on gravel after the snow and ice of Monte Carlo Rally and Sweden.

“A bit better but the line is not great,” said Atkinson.

“We made some set-up changes. We improved it in some areas and made it worse in others. We’re learning a lot.”

As well as Ostberg’s retirement from the leg both Robert Kubica (Ford) and Andreas Mikkelsen (VW) both rolled out.

The second leg still has five stages to run to complete the day’s action.

Next Story Atkinson clears the way in Mexico