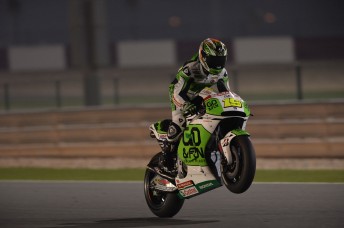 Alvaro Bautista stood atop of the Qatar test

Honda Gresini’s Alvaro Bautista has outpaced his rivals on the second day of the MotoGP Qatar test by over three-tenths of a second.

With the Factory squads of Honda, Yamaha and Ducati away, Bautista’s time of 1:55.194 put him two-tenths ahead of Aleix Espargaro fastest time on the opening day of the Qatar test under lights.

The Spanish rider, who was also on the pace last week in Sepang testing, worked with his team to overcome the front end problems he experienced at the desert circuit in 2013. He completed 55 laps on his Honda RC213V on Saturday and will aim to stay ahead of the pack on Sunday.

Behind Bautista on the timesheet Stefan Bradl was second quickest. The German LCR Honda rider is not testing new parts in Qatar, but is focusing on perfecting his set-up for round one of the World Championship and looking for some added grip to drop a further few tenths.

Aleix Espargaro was again the quickest Yamaha representative in third place. He was unable to match his best time from day one as he worked more towards a race set-up and the final day is sure to see him and others run full Grand Prix simulations.

Pramac Racing’s Yonny Hernandez had an eventful day, pulling up with a technical issue at one point and later crashing after losing the front end, though his spill was without serious consequence and he finished the day 1.3s off Bautista.

Testing at Losail concludes on Sunday before all the teams return in less than a fortnight for the opening round of the 2014 season.