Trying morning in Mexico for Atkinson 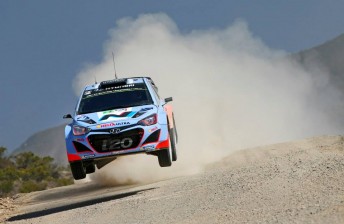 Australia’s Chris Atkinson has had a trying morning at Rally Mexico, but most importantly he is still in the event and is looking forward to a strong afternoon of stages around the city of Leon.

On his debut on the Hyundai i20, Atkinson had technical issues on the opening night stage, then on the morning stages he first had a broken switch in his car’s anti-lag system, brake problems and damaged right rear suspension. He is almost 4min 30sec behind.

“It happened a long left corner,” he said.

“I felt something strange and I thought I had a puncture. I didn’t hit anything but I guess an arm is broken.”

Despite his issues and with Mexico being a long rough gravel rally, Atkinson sits 13th with a repeat of the stages in the afternoon.

After five stages, the Citroen DS3 of Mads Ostberg is out front by 3.3sec from Sebastien Ogier (Volkswagen) heading into the lunchtime break. However, his lead could have larger if not for a mistake just prior to the 2.6km Parque GTO Bicentenario street stage.

Co-driver Jonas Andersson forgot to remove a radiator shield from the front of the DS3, a device used on road sections to keep the engine temperature up.

“He told me just 30 seconds before the stage start,” said the Norweigan. “I didn’t know if I could push, if the engine would overheat or not, so I had to take it carefully so I didn’t destroy anything. We lost a lot of time.

“I had to try not to focus on it in the stage and just drive as best I could. It’s difficult when you get a message like that just before the start and you know it’s not so good.

“Okay, it cost us some seconds but nothing more than that. It’s a small thing and now we have the nice stages again and I’m looking forward to that.”

Six more stages will be run in the afternoon and early evening.