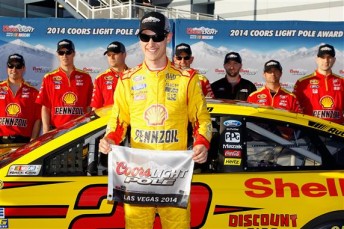 Penske Racing has once again locked-out the front row in the NASCAR Sprint Cup, this time Joey Logano trading places with Brad Keselowski to set the fastest time in Las Vegas.

Following their performance at Phoenix, the Penske duo once again made the most of the new elimination-styled NASCAR qualifying format. First progressing through the opening round which left 24 drivers, then the next segment which left 12 cars only for the final five minute run for the pole.

Logano won the pole for Sunday’s Kobalt 400 in track-record fashion in the five-minute third round with a lap at  311.051 km/h (193.278 mph). The Coors Light Pole Award was Logano’s first of the season, his first at Las Vegas and the eighth of his career.

“We’re all still learning what the best strategy is, when to go, when to cool your motor off, when to do all this stuff,” said Logano.

“We have an idea what we want to do. We’ve studied it as much as we can.

“But every time we do this we learn something that we may want to do different next time… All you can do is find the biggest hole that you can [between cars] and make sure you lay down the best lap you can. That’s what I get paid to do.”

A tough qualifying for Australia’s Marcos Ambrose who lost a lot of water at the very start of the opening session. He even made light contact with Logano as he tried to get down onto the pit road.

Under the new rules of qualifying only one member is allowed over the wall to make minor changes such as tyre pressures and track-bar adjustments.

“I knew something was wrong with the car, I couldn’t drive it,” said Ambrose.

“Drew Blickensderfer (Crew Chief) said there was water on the ground, on the hood, but the rules don’ allow you to lift the hood. So, we tried to make a lap, but it didn’t matter. There is something wrong under the hood, and we’ll replace the engine and start from the tail of the field.

“It just gives us a lot more cars to pass and that’s pretty fun.”

The Australian will make the race, but has had to call on a provisional spot as 48 cars are in Las Vegas for the 43 starting positions.

Next Story Keselowski wins with final lap pass in Vegas