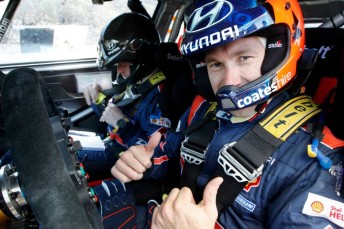 Australia’s Chris Atkinson has climbed from 26th at the start of the day to be eighth overall during a dramatic afternoon on the opening leg of Rally Mexico.

After a tough start on the street stage on the opening night, Atkinson then had other dramas during the morning stages. The afternoon proved far more positive as a solid run through the stages saw him improve his overall position. This despite crashing through water-filled barriers on the final spectator stage of the day.

“The guys said the tarmac was slippery – there’s oil or something on that one corner,” said Atkinson after the final stage of the day.

“I saw the concrete bollard and went for the plastic ones. I’m glad I did.

“It’s certainly been an interesting event so far and we’ve had a few issues that have cost us a lot of time.

“We kept pushing and this afternoon we made some encouraging progress. We can build on this tomorrow and keep clawing back the lost time but, most importantly, continuing to learn as much as we can.”

Atkinson benefited from a fleet of retirements including Ford’s Mikko Hirvonen (alternator failure); Kris Meeke (Citroen) with damaged suspension and then Robert Kubica rolled his Ford on the final spectator stage. Early in the day Andreas Mikkelsen retired from second when he hit a rock and broke his Polo R’s suspension. 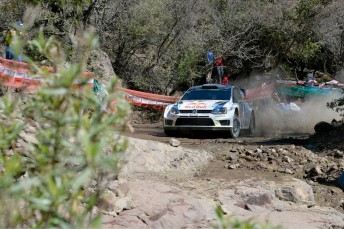 Up front Sebastien Ogier (Volkswagen) overhauled Citroen’s Mad Ostberg as he set four fastest times on cleaner tracks in the afternoon to lead by 26.1sec after almost 150km of stages.

“It was a great afternoon but it wasn’t an easy one,” said Ogier.

As first on the road, Jari-Matti Latvala endured the worst of the dirty conditions this morning. But he coped well and climbed from fifth to third, 42.5sec behind his Volkswagen colleague.

Elfyn Evans steered clear of trouble and lies fourth, 1.5sec clear of Atkinson’s team-mate Thierry Neuville in the other Hyundai i20.

The second leg contains seven stages and 170.08km of action, including the marathon 53.69km Otates test.