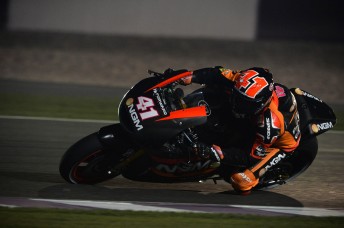 Aleix Espargaro has set the fastest time in the first day of MotoGP testing in the cool of the night at Qatar.

The Spaniard set a time of 1:55.386 in a session that did not include the main factory teams (Honda, Yamaha and Ducati) and riders who earlier this week took part in the tyre testing at Phillip Island.

With just under two weeks before the season opening Grand Prix of Qatar, 17 premier class riders are taking part in this test.

The NGM Mobile Forward Racing man was over two tenths ahead of his nearest rival on the Open entry Yamaha, with a time less than a second off Jorge Lorenzo’s 2013 Qatar pole lap – on a track which should produce even faster times over the next two days.

With the racing line cleared of any sand and with further rubber laid down on the track the pace is likely to increase as this test progresses.

A slower start was made on Friday with Danilo Petrucci the IodaRacing Project rider the only man to circulate in the first hour in hot temperatures and in the daylight, before 5pm.

The faster times came in the last two hours of the outing as the temperature dropped and the floodlights came into full effect.

Completing the top five were GO&FUN Honda Gresini’s Alvaro Bautista and LCR Honda’s Stefan Bradl with identical 1’56.081 best laps. Both riders ran with ‘Sepang 2’ test settings on Friday and will look to adapt their machines to Qatar configuration over the coming 48 hours.