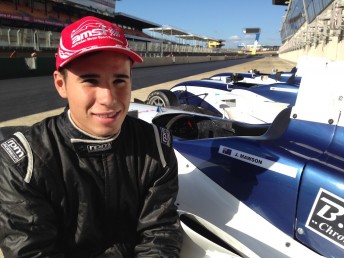 Mawson’s elevation into his first car racing championship comes after he successfully undertook an official assessment day at Le Mans a few days ago.

The 17-year-old will be based at the Auto Sport Academy at Le Mans for 2014 with the opening round of the seven-event championship slated for the Bugatti circuit at La Sarthe from April 25-27.

Mawson had tested a BRDC Formula 4 at Snetterton last October for Mark Godwin Racing as he explored his single-seater opportunities.

“To see Joey succeed at the top level of karting in Europe over the past couple of years has been great for Australian karting,” Doohan said.

“It’s proof that Australian drivers can mix it with the best in the world when they are able to gain the opportunities.

“Now that he is taking the next step in his motorsport career into Formula 4, it’s further evidence of the springboard that karting at the top level can provide our young drivers with.”

Mawson is fully acclimatised to living and racing in Europe after spending time living in Italy coinciding with the European and world karting championships last year.

“Living in Italy last year was a great way to tune myself into the dedication needed to make a career out of motorsport and this is the next step,” Mawson said.

“To have the support of the Australian Motor Sport Foundation once again is amazing and I can’t thank everyone involved enough for the support they have shown to me and my career over the past couple of years.”

The AMSF has played a pivotal role in the development of Joseph Mawson’s career.

“The graduation of Mawson from top-level karting in Europe to Formula 4 is proof of the opportunities provided by the Foundation,” AMSF chairman Geoff Morgan said.

“Joey Mawson is one Australia’s brightest hopes in recent time to reach the pinnacle of worldwide motorsport.

Mawson’s elevation to Formula 4 comes hard on the heels of the announcement by CAMS that the maiden Australian Formula 4 Championship in 2015 will run a control Mygale chassis.