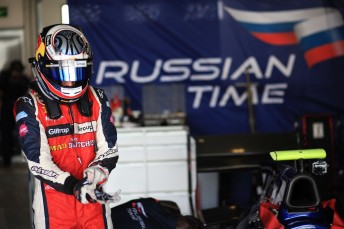 The 19-year-old Kiwi is heading into his second season in Formula 1’s feeder series after completing a new deal with the reigning champion team which is to be run by iSport Engineering.

The iSport news was triggered by the shock death of Russian Time team owner Igor Mazepa in January.

German team MotoPark had been running the team last season after striking a deal with Mazepa in a move which led Russian Time to the GP2 Team’s title through its drivers Sam Bird and Tom Dillmann.

However, the organisation announced last month that they have severed ties with the squad in the wake of Mazepa’s death.

iSport Engineering, who were bought out by Russian Time last season, has confirmed personnel from their operation will step up to run the cars for Evans and his team-mate Artem Markelov.

Despite the complexity of the changes, Evans is confident Russian Time will deliver this year as he sets his sights on winning the championship.

“Its pretty simple what my goal is this season; I want to win the championship,” Evans told Speedcafe.com

“I’ve had one year under my belt and now it is time to go for the title.”

After winning the GP3 title in 2012, Evans made a decent impact in his maiden GP2 year, claiming four podiums for Arden International.

“The team (Russian Time) was operated by Motopark last year and now they will be operated by iSport so I think we will still be very strong.

“It’s hard to say at the moment but I have faith in the team to provide me with a good car.

“We have just got to build on what the team did last year. They have proved they can win races so hopefully we can have a good start.”

“It is never nice to hear of anyone passing especially when they are so close to home.

“Igor gave me a chance in the car at the Abu Dhabi test last year and it was a huge shock to hear of his death.

“Its been tough for the team and his family (and) hopefully we can repay him with a good season.”

Evans is set to get behind the wheel of his Russian Time challenger when testing begins at Abu Dhabi’s Yas Marina circuit from March 11-13 ahead of the season opener at Bahrain on April 4-6.

“Testing is absolutely crucial this year as we only get six days with the car before the first race which in the whole scheme of things is very short time.

“The plan is to find a good sweet spot with the car and we can work with that for the whole season. it is something we lacked with Arden last year.”