Early drama for Atkinson in Mexico

Early drama for Atkinson in Mexico 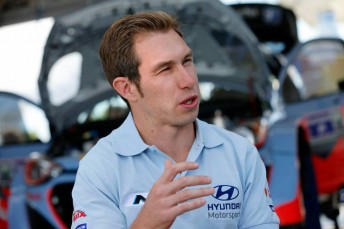 Australia’s leading rally driver  Chris Atkinson has experienced  a difficult opening competitive stage on debut for Hyundai after being hit with technical issues in Rally Mexico.

Atkinson’s Hyundai i20 cut-out soon after the start of the one-kilometre night time stage in the historic town Guanajuato, causing him to lose crucial time.

He had to carry out a complete re-start of the i20 and subsequently set a time 24.7 seconds slower than stage winner Sebastien Ogier in a Volkswagen Polo.

“I don’t know what happened but we reset the car and it started again,” said Atkinson.

“It’s not a perfect start but there’s a long way to go.”

Ogier’s time of 0:52.9 was 0.3-seconds quicker than Ott Tanak in a WRC2 Ford Fiesta with the other VW of Andreas Mikkelsen in third.

“It’s always slippery here and you have to be careful – no risk at all tonight.”

The fastest driver on the shakedown earlier today, Jari-Matti Latvala was fifth on the opening stage.

Although a long way down on the leaderboard right now, Atkinson will have 10 stages to claw back ground with the opening leg covering 148.62 competitive kilometres, including the 44.02km El Chocolate which is run twice.