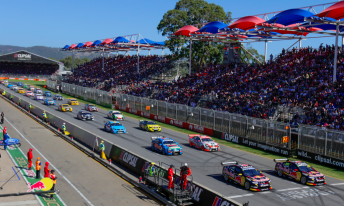 The V8 Supercars grid in Adelaide

V8 Supercars has implemented a new seven-man aerodynamic working group as it grapples with the challenge of ensuring parity between its five manufacturers.

The committee, which sits under the existing Technical Advisory Panel, will consist of four team and three V8 Supercars representatives.

Tekno Autosports’ team manager Steve Hallam, whose career has included stints at McLaren in Formula 1 and Michael Waltrip Racing in NASCAR, has been installed as chairman.

The panel’s first meeting is expected to take place ahead of the non-championship races at Albert Park.

V8 Supercars responded to Speedcafe.com’s enquiries about the aerodynamic working group with a one-line statement explaining that it has been implemented “to ensure that we have world standard practice in aerodynamic parity across the entire gross of the championship.”

The category’s aerodynamic and engine parity systems are well and truly under the microscope following the stunning debut of Volvo’s S60 at the Clipsal 500.

Scott McLaughlin steered the lead Volvo to a best result of second in Race 2 on Saturday, out-gunning five-time champion Jamie Whincup and his Triple Eight Holden in a dramatic finish.

The results came despite the Volvo having undertaken just a single day of track running with its complete bodywork and engine package prior to the event.

Notably, the Volvo was consistently the fastest car in both of Saturday’s races through the circuit’s speed trap, which was located at the end of the straight following the high-speed Turn 8 sweeper.

Official trap data obtained by Speedcafe.com (see bottom of story) shows the Volvo as the fastest both in terms of the median (calculated using the trap’s reading on every lap) and the highest speed readings.

V8 Supercars insists that its pre-season aerodynamic homologation process has already achieved parity for both downforce and drag, but isn’t ruling out the possibility of more testing in-season.

Although aggrieved teams have shied away from publicly criticising V8 Supercars’ handling of recent testing for fear of reprisal, Speedcafe.com understands there is growing momentum behind calls to see an aerodynamic test take place with all five cars as soon as possible.

January’s homologation of the Volvo and update of the Nissan Altima saw the two cars run against the pre-existing Ford Falcon at East Sale.

The rationale behind using the Falcon as the sole baseline has subsequently been a bone of contention after the V8 Supercars test team could not replicate the previous year’s front and rear downforce numbers with the car during the three days.

With the troubled test showing the supposedly unchanged Ford package to have more front downforce and less rear than previously, questions are being raised over the validity of the subsequent Volvo and Nissan homologations.

The apparent comparative lack of rear downforce on the Ford follows repeated complaints from Blue Oval runners of rear-grip and stability issues since the car’s wing was trimmed ahead of 2013.

The Nissan’s 2014 package is meanwhile known to have been homologated to an overall downforce figure, rather than being matched at both ends, with its repositioned rear wing now further from the car’s rear axle centre-line than had previously been allowed.

Volvo’s global motorsport boss Derek Crabbe has been bullish on any backlash from rivals following the Adelaide event.

“I am prepared to put anything on the table with any of the other teams and benchmark it,’ he told motoring.com.au this week. “I am expecting the kick-back, but we are wide open to that.”

Although the Volvo’s performance has heightened concerns with V8 Supercars’ processes, Polestar and Garry Rogers Motorsport have received widespread accolades for their work, which included arriving at the aero test with an already well-honed series of bodywork options.

The strength of Volvo’s engine has also been a major talking point following Adelaide, with the 5.0 litre variant of the B8444S having been homologated by V8 Supercars the week prior to the event.

The recently implemented engine parity process has seen powerplants from each of the category’s eight engine suppliers analysed by V8 Supercars’ appointed dyno in Queensland.

The system requires each engine to sit below a pre-determined figure calculated from its power curve between 5,800rpm and 7,400rpm.

Any new parts submitted to V8 Supercars for homologation will only be granted if they do not see the engine exceed the specified figure.

Although teams have been given their own engine data from the dyno testing, they currently remain in the dark on the matter of how close they are to the ‘ceiling’ figure and therefore their scope for further development.

The below tables show the median and maximum speed trap figures (in km/h) of the two fastest cars (based on the median) from each manufacturer. Data is taken from Races 1 and 2 in Adelaide.