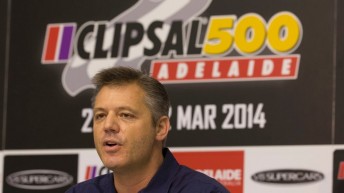 Amid a continued quest to add international events to its championship, V8 Supercars has thrown support behind four new permanent circuit projects in Australia.

V8 Supercars CEO James Warburton has confirmed that the category has signed memorandums of understanding with four developments that could one day join the calendar.

They are known to include proposed motorsport complexes in Tailem Bend, South Australia, and in Toowoomba, Queensland.

Although it does not have direct financial involvement in the facilities, Warburton says that the category is providing resources in order to grow the country’s permanent circuit base.

Australia has not seen a new national-level circuit open since Queensland Raceway in 1999.

“A lot of these things need a driving force behind them and in some ways we’re creating that.

“Our business is to support them and talk about what our needs would be (as well as make) commitments where appropriate so that they actually know that there’s an end game.

“(We are providing) resources, IEDM and Mark Skaife for track design and of course (working with) CAMS in terms of assisting.

“At the end of the day more great facilities is better for us.”

Skaife and IEDM visited Tailem Bend in the week prior to the Clipsal 500 Adelaide to inspect the former Mitsubishi proving ground site.

The local Labour government and Liberal opposition have both thrown their support behind the proposed development in recent weeks as they jostle for votes in the upcoming election.

If the project is to go ahead, it is unlikely to be in a position to hold a V8 Supercars event until 2024.

In Adelaide at the weekend, Warburton was keen to stress V8 Supercars’ keenness to assist existing permanent Australian venues when it comes to attracting government funding.

“There has been a lot of development into football stadiums and the like, but if you look at an event like Winton, it’s such a large-scale event for the region,” he said.

“It’s important that we’re putting our resources and expertise behind it and standing alongside them and assisting them in terms of improving their facilities.”

Warburton revealed during a press conference at the Clipsal 500 that he hopes to see a maximum of three new international races join the calendar over the coming years.

Discussions are currently taking place with five different countries in addition to those surrounding a second race in the United States.

Such new fixtures appear likely to add to the current roster of 14 domestic events.

“I don’t think there’s any optimum number. I don’t think I want to grab a number and just say let’s have 18 races,” he said of the calendar’s size.

“I think we’re not far from being right at the moment, but I would like to see the season end in November and we’ve been open about trying to get it to end at that time.

“Really, last weekend of February through to the end of November is the season we’d like to see.

“Somewhere within that we’d like to see between 14 and 16 events with no more than four internationally.

“I think it gets too late into Christmas,” he added of the preference against running into December.

“Teams have an enormous amount of servicing to do in terms of sponsors and anything to compress it a bit more would be a really good thing.”